Competitors in the Allcomers category at next month’s Rally of Otago will have a greater prominence, thanks to a revised seeding order in the May 10 and 11 event.

In an initiative introduced for all New Zealand Rally Championship
rounds, Allcomers competitors will be seeded, on merit, amongst those
crews contesting the NZRC component of the rally.

Previously, the
Allcomers competitors were at the back of the field, with many of the
spectators having moved on to the next location before they arrived. 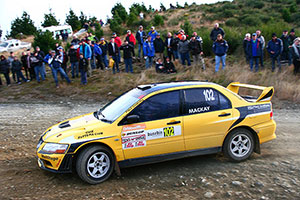 “A
large part of the Allcomers are the more local competitors, and we are
excited that this initiative will provide more prominence, and
encouragement for them to compete,” Otago Rally spokesman, Roger Oakley,
said.

“These competitors are the backbone of our sport. The
Otago Rally provides great value per competitive kilometre, and is not
hard on cars.

“The Allcomers class is an ideal way for locals and
newer competitors to do a lot of competitive distance and measure
themselves against the best.”

The change in seeding will allow
recent Allcomers winners such as Rhys Gardner (2012) and Dean Bond
(2013) to run higher up the order, and with potentially better road
conditions than they have had in previous years.

This year’s
event will see the NZRC and Allcomers competitors run first on the road,
followed by the International Classic Rally of Otago.

Entries
for the event are now open , with a big field of local and international
drivers expected to take part, including former World Rally Champion,
Didier Auriol.