The four-time Australian Rally Champion won last year’s Otago Rally in
convincing style, and will return with co-driver, Coral Taylor, and the
same Toyota Celica that he drove to victory in 2013.

He will be
joined by fellow Aussie, and Otago Rally regular, Jeff David, who will
drive the Porsche 911 that took him to victory in last year’s Alpine
Rally.

“I think the attraction, apart from the incredible roads, is the depth of the classic competition in New Zealand,” Bates said. 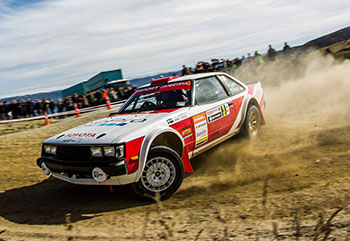 “The New Zealanders have been doing classic rallying for a lot longer, so they have a lot of really strong cars and drivers.

“Coral and I absolutely loved the experience in Dunedin last year, and we can’t wait to go back and try again.

“The organising team do a brilliant job and can’t do enough to help you, which makes the experience even more memorable.”

Such
is the commitment of Bates and David to the Otago Rally, that they will
both miss the next round of the Australian Classic Rally Championship
in Western Australia.

David said that the Otago Rally is his favourite event of the year, and one that he didn’t want to miss.

“The
roads in the Otago Rally are amazing, easily some of the best roads in
the world, so to have the chance to compete on them is one that is very
hard to pass up,” he said.

“The stages are fast, flowing and smooth and that really suits our car. I can’t wait.”

Both
drivers are looking forward to the challenge of matching themselves
against former Lancia and Toyota WRC star, Didier Auriol.

The
Frenchman will drive a Ford Escort RS1800 prepared by the local
Rossendale Wines Rally Team, and after competing regularly in his own
Escort, Auriol is expected to be right on the pace.

The rally
will start from Dunedin's Octagon on Friday evening, May 9. After two
days of intense competition, the historic Dunedin Railway Station will
host the finish celebrations on Sunday afternoon.

Before then,
however, competitors will tackle 14 competitive stages to the south of
Dunedin, with 280 kilometres of competitive driving over the two days.

Entries
are already flowing in for the rally, with strong interest from several
leading competitors in the Classic Rally, all of whom have demonstrated
the ability to win the event.

The event is also the second
round of the New Zealand Rally Championship, with drivers including
previous champion, Richard Mason, expected to compete.