The 2016 Otago Rally has had a date change and will now be held from April 8 to 10 as the first round of the New Zealand Rally Championship.

The decision to move the date was triggered by the withdrawal of Rally New Caledonia from the Asia-Pacific Rally Championship (APRC). 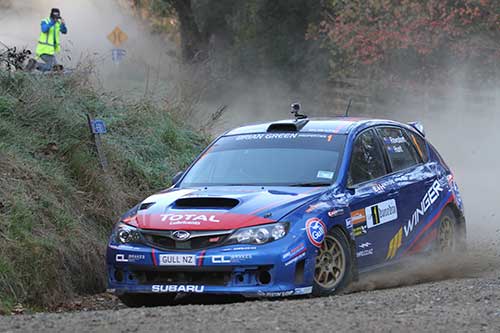 Current NZRC leader, Ben Hunt, in action during the 2015 Otago Rally.“The date change was considered at length by the organising team, and we have agreed to basically swap dates with Rally Whangarei,” Otago Rally spokesman, Roger Oakley, said.

“New Caledonia’s withdrawal from the APRC left the Whangarei event isolated at the beginning of the year, so we have made the decision for the good of the sport.

“We considered the impact on our key rally supporters, including the Dunedin City Council, and venues such as the Scenic Hotel as Rally HQ.”

The Whangarei event is organised by the Rally New Zealand team, and with the country still working towards a return to the World Rally Championship, achieving the best outcome for the APRC round was a key consideration.

The Otago Rally will begin on Friday, April 8 with a ceremonial start in Dunedin’s Octagon, before two days of competition to the north and south of the South Island city.

As well as being the first round of the New Zealand Rally Championship, the event will also host the popular International Classic Rally of Otago.

Several big-name international stars are already being targeted to contest the 2016 rally.