Ford vs Holden battle at 2012 Rally of Otago

A classic Ford vs Holden battle will rage throughout this year’s International Classic Rally of Otago, with two V8 monsters ready to fight it out.

Australian drivers Keith Callinan and Dave Thompson will bring their cars to New Zealand’s South Island, with spectators at the popular event the biggest winners.

Keith Callinan, from far north Queensland, is an Otago Rally regular,
having driven a Ford Escort RS1800 in recent years. However, it’s his
past performances in his thundering 6.0 litre Holden Monaro HK that have
endeared him to spectators.

While the big Holden has never had reliability on its side, it’s a car
that Callinan loves, and he is looking forward to sliding around the
smooth gravel roads to the north and south of Dunedin.

Together with his co-driving wife, Mary-Anne, they have driven the event
on pacenotes, as well as off the road book, in the past, and if they
enjoy a troublefree rally, they will be well in contention for a top 20
finish. 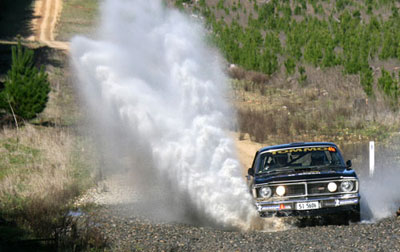 Dave Thompson’s Ford Falcon XY GT.“It’s going to be great to bring the Monaro back to Dunedin,” Callinan said.

“There are so many good Escorts in the event that it’s great to drive something different, and the crowds really love the car.

“We know of people who have driven down from the North Island just to see the car in action, and that really gives us a thrill.

“We’ve had a new engine built, which should be more reliable than in the
past The motor has been de-tuned a little bit, but it’s still go lots
of grunt,” he says enthusiastically.

In the hands of former Australian Champion, Barry Lowe, the car won the
1991 South Australian title, but Thompson has had the pleasure of
driving the car in more recent times.

A two-time ARC ‘Aussie Car’ V8 champion, Thompson is no slouch behind
the wheel and should offer Callinan a real challenge over the event’s
three-days and 16 special stages.

“Dave’s car will really get the spectators cheering,” Callinan adds.
“It’s a real weapon, and in Dave’s hands it’s pretty exciting to watch!”

The 2012 Rally of Otago is again attracting a high quality field for the classic component of the event.

Competition will begin on Friday night, May 25, with three stages close to the city, totalling nearly 60 kilometres in length.

The night stages were reintroduced in 2011, with competitors and
spectators enjoying the opportunity to watch some of the best rally
drivers light up the forests.

The rally heads north of Dunedin on Saturday morning for seven gravel
stages, with the day finishing with the tarmac street stage around the
city after over 115 competitive kilometres.

Stages include Shag Valley, a couple of new stages and a return to Waikouaiti, a stage not used in the event for many years.

The final day, Sunday, will provide a real sting in the tail for the
remaining competitors, with a further six stages and over 130km,
including two stages of at least 25km, and a marathon new 45km test
through the Berwick Forest, which will be the penultimate of the rally.

Along with the International Classic Rally of Otago, the event also
includes round three of the New Zealand Rally Championship, and the
popular Allcomers event.