Today’s first day in the 2009 Southern Cross Hotel Rally of Otago has seen a close battle between defending series champion Hayden Paddon and current leader Richard Mason swing the way of the challenger late in the afternoon.

The second of five rounds in the Vantage New Zealand Rally Championship (NZRC), the two-day rally uses a mixture of forest and county roads around Dunedin in central Otago.

Geraldine based driver Hayden Paddon and co-driver John Kennard
(Mitsubishi) held the lead for most of today, until the slender eight
second lead swung away from the defending champion in the 42.30
kilometre Glenburnie stage.
Scalped by Masterton based Richard and Sara Mason (Subaru), they
extended their championship points advantage after taking a 15.8 second
lead having completed today’s eight tests.

“We were fairly slow off the mark for the first half of the day and
spent the whole afternoon gather pace with the long stage pretty good
to us.  We gathered it all together and that’s what it all came down
to,” said Mason after the final stage, collecting a further 32 points
to his tally, while Paddon earned 27. 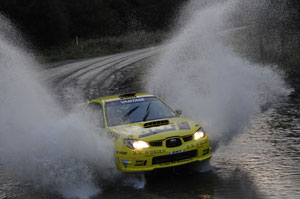 Richard Mason makes a splash on SS1 of the Otago Rally.“We’ve been working on a little extra handling; Hayden (Paddon) has
stepped it up a bit, his switch to Dunlop tyres too has probably helped
him.  So it outlines we had a problem with the suspension earlier in
the day and now we’ve got a quick car again.”

Graced by unseasonably mild weather following snow and wet conditions
in the days’ leading up to the event, today’s clear skies treated
spectators at each of the eight tests, providing a home-coming treat to
former Dunedin residents Emma Gilmour and Glenn Macneall.  Finishing
third for the day, the Subaru team are 36 seconds behind Mason after
132km of competition.

“We’re happy with our day, even after making a wrong tyre choice later
in the afternoon.  The pace is just so hot at the front; it’s great to
be where we are heading in to tomorrow.  But I definitely want to be
keeping the pressure on those front two,” said Gilmour.

Other retirements for the day included Glenn Inkster and Glenn Goldring
(Mitsubishi) with brake failure after the first test, while Kingsley
Thompson and co-driver Richard Ellis rolled their Mitsubishi EVO X in
the sixth stage.

Tomorrow’s final six stages turn the crews northward before a repeat of
the 42.3 kilometre Glenburnie stage south of Dunedin completes the
competition.  Returning to Dunedin’s octagon, a ceremonial finish
presentation starts at 2:30pm.