The Subaru driver is well clear of the Mitsubishi Lancer Evo X of Sloan
Cox, with local favourite, Emma Gilmour, a further 4.3 seconds further
back in third place. 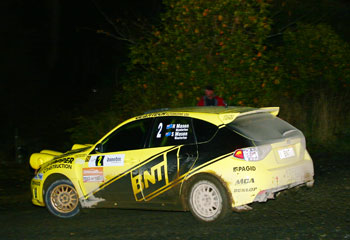 Kelsey won the opening round of the NZRC, but on this the third event,
he finds himself over a minute from the lead, having never driven
competitively at night before.

Crews faced perfect conditions on the opening night, after overnight
rain settled the dust and made conditions equal for everyone.

Mason showed his hand early with a blitzing drive, and even though there
are still 14 stages remaining over two days, he'll be hard to catch.