NOTE: Photos from Day 1 will be added to the website later tonight.

Despite having never competed in the Otago Rally before, Bates immediately showed his intentions, winning the opening 18.36 kilometre stage by 13.5 seconds from Buist. From there, the four-time Australian Champion continued to extend that lead.

So impressive was Bates’ speed on the first day of the rally, held to the north west of Dunedin, he lies an incredible fourth outright in the combined results that also include the New Zealand Rally Championship cars.

“I’m sure if I had the day over again I could do a lot better, but I’m really enjoying the roads and the car has been perfect.

“I’ve got no complaints really, although we have had some issues with the wheel rims which meant that we couldn’t run tyres which were soft enough. We struggled for grip a little, particularly on the Dansey’s Pass stage.

“Other than that it was great. We’ll keep pushing hard tomorrow to try and maintain the lead,” he said.

In second place, Buist is still well within striking distance of Bates should the Australian hit trouble over the final day’s eight special stages.

Ayson is also still in with a chance, however he’s over a minute from the lead and would need luck to be on his side if he was to secure a fourth event win. 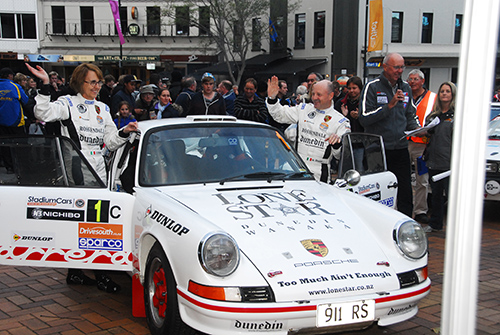 Miki Biasion leaves the start in Dunedin on Friday night.

Italian driver, Biasion, has not competed competitively for many years, but his skill was clearly evident as he tackled the slippery gravel stages. His co-driver, fellow Italian Fabrizia Pons, is an Otago Rally regular, and her knowledge of the event has proved vital.

Biasion got faster as the day wore on, and will be hoping for an even better showing on day two.

“It has been a fantastic day,” co-driver Fabrizia Pons said. “The roads were in beautiful condition, but very fast.

“Our day has gone very well and Miki is driving well.”

The Allcomers Rally is led by Brian Stokes in a Ford Escort 2500, ahead of Steve Wellington’s Lancer Evo 6, and Dean Bond’s Lancer Evo 6.5.

The final day of the Rally of Otago will see crews head to the north west and south of Dunedin, with eight special stages. The rally concludes with three of the event’s most famous tests – Waipori Gorge, Kuri Bush and Whare Flat.

The rally finishes at the historic Dunedin Railway Station, with the champagne to be sprayed at around 3.15pm.