Joining the growing contingent of hopefuls vying for the overall Goldstar title by contesting the 2013 Brian Green Property Group New Zealand Rally Championship are a Queensland team, committing to the six-round series. 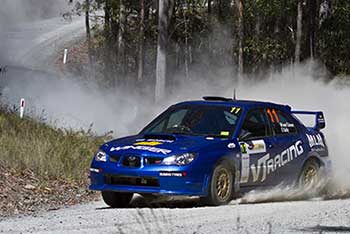 Matt van Tuinen, a 2009 Queensland Rally Champion, will campaign a
Subaru STi with co-driver Erin Kelly. Returning for a full tilt this
year having done a part season in 2011, the 33-year-old says the lure of
the New Zealand series was too much to resist.

“We had so much
fun in 2011 with the roads, events and people we met that we’ve been
planning ever since to come back – it’s just so much fun to rally in New
Zealand.”

Competing in the overall Super Rally field, supported
by Auto Finance Direct, van Tuninen says the additional incentive of
prize money added to his decision to again challenge the Kiwi’s on their
home turf. While the car is being shipped to New Zealand for the
opening round it will be based at a Hamilton workshop for the first half
of the season.

“Then we are going to do the Pacific Cup so our
car will travel out to New Caledonia and on to Australia, so we’ll look
to source another car in New Zealand for the last few rounds – locally.”

Another
lure was the cost to compete: Van Tuninen says the outlay is about the
same to ship his car and crew trans-Tasman to competing on home soil:
“And it is much much closer than going to Perth, for example,” he adds.”
“From
that point of view it makes a lot of sense to look at New Zealand
events. We hold no illusions that we’re not going to be blowing everyone
away. We know New Zealand drivers are very very fast and they have an
advantage knowing the roads but we’ll be doing the best job we can and
be there to have fun at the end of the day. Plus with the rule changes
there are going to be some interesting cars and it’s going to be
interesting to see who the front runners will be. We just have to do the
best job we can and see where we end up at the end of the day.”

Among
an entry list of current and past rally champions nudging past 28 with a
week until entries close, the opening round starts with the Drivesouth
Rally of Otago from 6 to 7 April. The series then heads north for the
FIA Asia Pacific Rally Championship round at the International Rally of
Whangarei in association with the Brian Green Property Group (17-19
May). The rest of the season is then one day events: Daybreaker Rally
(Manawatu, 29 June), Canterbury Rally (10 August), 10th Anniversary
Possum Bourne Memorial Rally, sponsored by Vantage (7 September) with
the final being held at the Trusthouse Racetech Rally Wairarapa (5
October).