Hyundai driver David Holder has continued his championship winning form after a great drive to win the first round of the New Zealand Rally Championship at the Otago Rally. 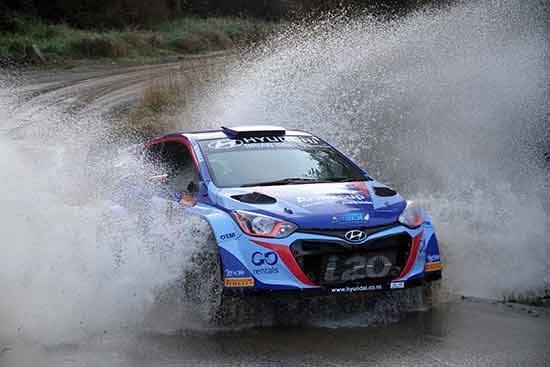 David Holder won the Otago Rally in his Hyundai i20 AP4+. (Photo: Peter Whitten)In his first event in the Hyundai i20 AP4+, Holder lead overnight, and continued his strong form on Sunday to win the rally ahead of Andrew Hawkeswood’s Mazda 2 AP4.

Despite losing over 30 seconds on the first stage of the day, Holder won three of the day’s following six stages to guide the Hyundai to its second straight Otago Rally win.

Hawkeswood, who also lost time on the first stage, strung together a series of top five stage times to consolidate his second place.

After leading briefly on day one, Rhys Gardner finished two minutes adrift of the leader, capping off a great weekend for the Mazda 2 driver.

Graham Featherstone and Sloan Cox rounded out the top five after consistent runs in their Mitsubishi Evos – both collecting a stage win over the weekend, with Dylan Turner (Mitsubishi), and former New Zealand Champion, Ben Hunt (Subaru), further back.

Glenn Inkster was a casualty on the second day, with mechanical problems halting his Skoda Fabia, while local hero, Emma Gilmour, won the day’s opening stage, before retiring with steering damage.