Winning by a margin of 19.7 seconds after 255 kilometres of competition over a mixture of forestry and county roads in central and southern Otago, the final day of six special stages was a climatic finish.
The second of five rounds in the nation-touring competition, clearing
skies after steady overnight rain in Dunedin provided muddy conditions
compared to the drier road surface the teams contested on the Saturday.

Starting to extend his overnight lead, Mason’s BNT Subaru was later
reeled in by the Team Green Mitsubishi of Paddon, while Alexandra’s
Andrew Hawkeswood leap-frogged the Subaru of Emma Gilmour for third
place.

With 0.3 seconds separating the leading pair heading in to the final 42
kilometre test, the final result extended the 22-year-old Geraldine
based driver’s lead and reduced his championship deficit by two points
to the Masons’.

“The car has been an absolute weapon on the fast stuff.  All weekend it
has been setup well for it but come the twisty and wet stuff we just
haven’t had the measure over Richard – he’s been extremely quick,” said
Paddon.

“We were nervous, Richard took a lot of time off us in the same long
stage yesterday and half-way through it wasn’t really working for us so
we though we wouldn’t do anything stupid and throw it off the road.
Unfortunate for Richard a puncture, but that’s rallying and here we are
at the end.”

With a ten point lead in the championship standings, Richard and Sara
Mason rued the final stage show-down result:  “Hayden has been taking
it to us all day, but I was fairly confident we could go fast enough to
win the stage and hopefully the rally, but about 12-13 kilometres from
the end we got a puncture and it just got worse.  That’s the breaks –
that’s motorsport.  We’re happy to have second; we’re still leading the
championship so very happy.” 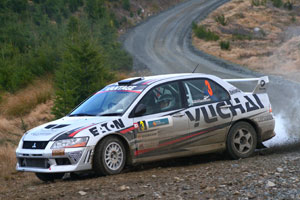 Hawkeswood was third, despite a last stage crash.A dramatic twist for third place finisher Andrew Hawkeswood and
co-driver Rocky Hudson struck the Alexandra based team in the final
stage.  Securing the final podium position in the open-class Mitsubishi
Lancer EVO 7 after Gilmour battled with differential issues, Hawkeswood
impacted with a forestry gate that tin-opened the rear of the car.

“The centre differential had packed up and I knew it was going to be
slippery in that last stage,” said Hawkeswood.  “But unfortunately I
misjudged a corner, hit a gate and it tore through the back of the
car.  I got a bit mad after that, but still managed to pull a
half-decent time.”

Fourth, Gilmour finished a narrow 4.9 seconds behind after a slender overnight hold on the previous podium position.

“It’s been an awesome weekend – good points on the board,” said
19-year-old Jagger.  “This is the class to watch this year.  We’ve got
the lead now so it’s just going to be a battle to the end to keep on
top of it.”

Christchurch’s Matt Jansen holds his lead in both the junior and rookie
standings, after round wins by Kieran Hall and Sloan Cox respectively.

Three weeks to the mid-season round, the teams trek to the other end of
the country for the international category FIA Asia Pacific Rally
Championship event: NAC Insurance International Rally of Whangarei (5-7
June).