RallySport Magazine are currently putting together a spectator tour for the 2013 International Classic Rally of Otago, to be held in New Zealand's South Island in April.

Having attended the event over 10 times, RallySport Magazine are well
placed to guide you through the best spectating options for this year's
event, as well as providing special additions to make your trip one to
remember. 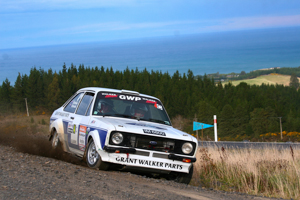 Australian Grant Walker in action in the 2012 Rally of Otago.After tour participants make their way to Dunedin, the
tour will begin on Thursday morning, April 4, and conclude on Monday,
April 8, with the tour package including four-nights quality hotel
accommodation, hire car, and many rally extras.

The planned tour
itinerary* will include dinner with Miki Biasion on the Thursday
evening, the opportunity to drive over some of the rally's iconic
stages, and the event's famous presentation dinner on the Sunday night.

In
between, you'll see the best of the spectator locations, which utilise
the Otago Rally's traditional shire road stages, as well as spectator
points in the surrounding pine plantations.

Self-drive tour prices start from $675 per person, double share. (Contact us for the exact price in New Zealand and/or Australian dollars)

Due
to limited accommodation in Dunedin over the rally weekend, places on
the tour will be strictly limited. Those wishing to obtain further
information, should contact RallySport Magazine as soon as possible, but
sending an email to: tours@rallysportmag.com.au

We will then correspond with you to provide more information.

The proposed tour itinerary* is as follows:

The 2013 Rally of Otago tour will include: