Fans of Ari Vatanen have the chance to bid for a signed photograph of the 1981 World Rally Champion at the 2011 Rally of Otago.

All money raised from the auction will be given to the rally organisers, who will donate the money to a competitor and family severely affected by the recent Christchurch earthquake. 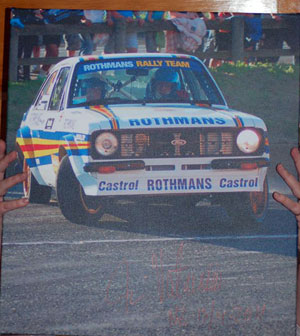 Measuring approximately 580mm x 420mm, the brilliant photo shows Vatanen
and Jim Scott sliding their Ford Escort RS1800 during a demonstration
run around the street stage of the 2011 Rally of Otago.

The photo was taken by Graham Roper, with the canvas printing donated by Tim Green from The Photo Gallery in Dunedin.