Finland’s Ari Vatanen, one of the biggest names in world rallying, will be the star attraction at this year’s Classic Rally of Otago.

The 58-year old is widely regarded as the most popular rally driver ever, having won the 1981 World Rally Championship with an on-the-limit driving style that thrilled spectators the world over.

For the Dunedin based rally, to be run from April 8-10, Vatanen will
return to his roots, driving a rear-wheel drive Ford Escort RS1800
similar to that in which he scored the first four of his 10 World Rally
Championship victories.

Vatanen will be co-driven by the Italian, Fabrizia Pons, who has become a
regular visitor to the Rally of Otago, having called the pacenotes for
Michele Mouton, Alex Fiorio and Piero Liatti at the event in recent
years.

The addition of Vatanen to the entry list for the Rally of Otago is yet
another major coup for the southern hemisphere’s foremost classic rally. 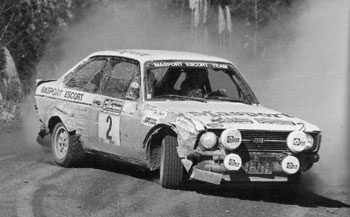 Vatanen on the 1977 Rally of New Zealand. (Pic: Wayne Churton)Former World Rally Champions Bjorn Waldegard, Hannu Mikkola and Juha
Kankkunen have all contested the rally in recent years, as have a number
of the sport’s biggest names, including Russell Brookes, Jimmy McRae,
Pasi Hagstrom, Fiorio and Liatti.

DriveSouth Rally of Otago spokesman, Roger Oakley, said that having
Vatanen’s name on the entry list was the jewel in the crown for the
event.

“Ari is the driver that we’ve been trying to lure to Dunedin for many
years, and to finally have him confirmed for 2011 is a real coup,”
Oakley said.

“The work of Brent Rawstron and his Rossendale Wines rally team has been
instrumental in achieving this, they have done an outstanding job in
hosting and running these top drivers over the years”.

“Ari won the World Rally Championship in 1981, but more than this, he is
a real icon of the sport and his entry is certain to attract hundreds,
if not thousands, of extra spectators to the event.

“As a former factory driver for Ford, Peugeot, Opel, Subaru and
Mitsubishi, he is without doubt one of the most charismatic
personalities that rallying has ever known.”

“We are also very fortunate to have the friendship the event has with
Fabrizia Pons, she is a world-class co-driver and a fantastic ambassador
for us,” Oakley added.

Dunedin is certainly going to be the centre of attention on the weekend
of April 8-10.  The Otago Rally will be complemented by the final
weekend of the renowned iD Fashion week, providing the ideal opportunity
for a ‘his and hers’ weekend visit.

Vatanen’s trip to Dunedin will by no means his first competitive outing in New Zealand.

In fact, his very first finish in world championship rallying came on
Rally New Zealand back in 1977 when, driving for Ford, he was the sole
serious opposition to a massive four-car assault by the factory Fiat
team. Despite rolling or crashing his car on numerous occasions, Vatanen
never gave up in his pursuit of the Fiats, and in the end finished
runner-up by a narrow margin.

“We won, but it destroyed us,” was how the Fiat team manager of the day
described the experience of Vatanen’s never-say-die assault.

After a ceremonial start in Dunedin on the Friday evening, April 8, the
DriveSouth Rally of Otago begins with three night-time stages with a
competitive distance of around 50 kilometres.

The rally will continue on Saturday with six daylight stages, including
the popular tarmac super special stage around the streets of central
Dunedin.

Along with the International Classic Rally of Otago, the event is also
the first round of the New Zealand Rally Championship for 2011.