The international flavour at the Classic Rally of Otago will continue in 2013, with the addition of two Australian-built Alfa Romeos.

The two cars have remained in New Zealand after November’s Silver Fern Rally, and will be re-prepared ahead of the April 5 to 7 event.

Long-time Brisbane Alfa specialist, Richard Anderson, will head the
two-car team in his Alfa Romeo 75 2.5, while Michael Francis will drive
an Alfetta GTV6.

Dunedin locals, Tony Johnstone and Mark
Laughton, have assisted the Australian teams in leaving their cars in
New Zealand, with the Rally of Otago also providing valuable assistance. 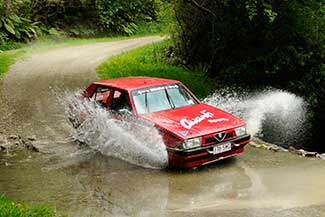 Anderson,
to be co-driven by Martin Darch, is a veteran of the sport, having
competed in two London to Sydney Marathons, while Michael Francis and
his co-driving wife, Dale, are relative newcomers to rallying.

Rally
of Otago spokesman, Roger Oakley, is pleased to have another two
Australian competitors in the event, joining a long list of Aussies who
have travelled across the Tasman for the rally.

Event spokesman Roger Oakley said he was delighted with the entry of the Alfa team.

“We always really enjoy competitors from Australia in our event, and the Alfas add a different flavour,” Oakley said.

“It’s a nice synergy to have these Italian cars entered in a year when our guest driver is also Italian.”

Their
entry in the event comes shortly after confirmation that two-time World
Rally Champion, Miki Biasion, will contest the event a local Porsche
911.

Next year’s Rally of Otago will also be the first round of
the New Zealand Rally Championship, and the 20th consecutive year that
the Otago Sports Car Club has hosted a round of the NZRC, a feat that
even Rally New Zealand can’t claim.