After a successful season in 2009, winning the Historic category in the Victorian Rally Championship and finishing 7th outright in the Alpine Rally  last November, Mike Conway and Jenny Cole are heading to New Zealand to compete in the 2010 Rally Of Otago in their PowerPlay-backed Mk2 Escort.

The 2010 Rally Of Otago, the first round of the New Zealand National Rally Championship, is again shaping up to be the ultimate classic rally not to miss.

The event attracts  plenty of local crews, a good field of cars from
Australia and at least one international star. This year, Piero Liatti,
winner of the 1997 Monte Carlo Rally for Subaru, will run in an Escort
RS1800. 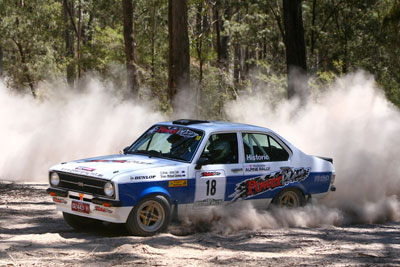 Mike Conway will drive his Escort in the Otago Classic Rally.“The Otago has always been on my list of things to do in life,”
commented Mike Conway, “and with Jenny keen to compete in NZ again,
having previously competed in Targa New Zealand in 2003 navigating for
Peter Brock in the Holden Monaro, we made the decision late in 2009 to
bite the bullet and send the car to New Zealand.”

The Classic regs in NZ allow for major modifications including all Group
4 mods and even running any engine you want. Conway’s car has proven
fast and reliable in the past and the crew are looking forward to the
challenge.
Unlike most Australian rallies, the crews are allowed to use pacenotes
in the Otago Rally. This, along with changes to the event including the
use of many stages not used since the early 2000s, will hopefully help
the lesser spec PowerPlay Escort.

The event kicks off on Saturday morning with a total of 144.15km over
eight special stages, and finishes on Sunday with 266.15km over another
eight stages on Sunday.