Four-time Australian Rally Champion, Neal Bates, has become the first driver from across the Tasman to win the Stadium Cars / Nichibo International Classic Rally of Otago after a dominant performance in the Dunedin-based event.

Together with co-driver Coral Taylor, Bates led from the very first stage in his Toyota Celica RA40, and finished the two-day, 16 stage event with a winning margin of 56.9 seconds.

The 1988 and 1989 World Rally Champion, Miki
Biasion, quickly got back into the groove after many years out of
competition, bringing his Porsche 911 RS home in fifth place. 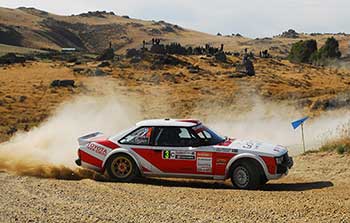 Day
2 of the Stadium Cars / Nichibo International Classic Rally of Otago
saw competitors contesting eight special stages to the north west and
south of Dunedin, with three of the rally’s most famous stages – Waipori
Gorge, Kuri Bush and Whare Flat – concluding the event.

With a
38.2 second lead heading into the final day, Bates was intent on
preserving his advantage, rather than taking undue risks in the push for
victory. After winning six of the eight stages on day one, he won just a
solitary stage on day two, however it was more than enough to secure
victory.

"Everybody told me it couldn't be done and we've done it.  There's a lot of non believers in Australia.

"Waipori Gorge and Kuri Bush are just the best stages I've ever done."

"We have just had a most fabulous Otago Rally," co-driver Coral Taylor said.

"We've
competed on the fastest stage we've ever done, the trickiest stage
we've ever done and probably the most fun stage ever at Kuri Bush.

"It
is a great feeling to win this rally. The NZ competitors are a great
bunch. Actually New Zealanders in general are a great bunch, they can't
do enough to welcome you and help out wherever possible. This has been a
really enjoyable trip."

Ayson, the 2009-2011 winner, was third
at the start of the day, but put in an inspired drive to claim six of
the day’s eight stages and move ahead of Buist into second place. He and
co-driver, Andrew Graves, finished 25.1 seconds clear of the
Christchurch driver – the 2007 rally winner.

Competing
in Dunedin for the first time, Miki Biasion was perhaps never likely to
have the outright speed for victory, but consistency was always going
to be his strong suit. Together with fellow Italian, Fabrizi Pons (a
regular Otago Rally competitor), they were always in the mix for a top
five finish.

"So many nice stages in the same area. I hope to be back in the future."

The event also included
the Rally of Otago, the first round of the 2013 Brian Green Property
Group New Zealand Rally Championship, with Hayden Paddon and John
Kennard taking a dominant victory on both days.

The 2011
Production World Rally Champions were far too polished for their rivals,
with reigning NZ champions, Richard and Sara Mason, finishing second in
their Subaru Impreza WRX.

A close battle in the Allcomers Rally
eventually went the way of Dean Bond and Ross Moody (Mitsubishi Lancer
Evo 6.5), just 21.9 seconds ahead of the Ford Escort of Brian Stokes and
Ally Mackay.