Driving a Nissan powered Ford Escort, Ayson and co-driver Greg Scott took victory by a comfortable margin of two minutes and 30 seconds from Australians Brad Goldsbrough and Aaron Topliff in a Datsun 1600.
Another Aussie combination, Jeff David and Grant Geelan, took third
place in their Porsche 911, while Ross Dunkerton and Alan Stean were
fifth in an Escort.

Overnight rain in Otago gave way to fine and windy weather for the majority of day two, with six stages to be tackled. 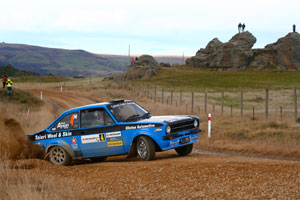 Derek Ayson took victory in the Otago Classic Rally.McRae and co-driver, Erin Kyle, looked set to take a convincing win in
their Ford Escort RS1800, winning the first four stages of the day. But
their BDA engine let go in a big way on SS13, leaving the Scotsman
stranded.

That gave the spectacular Ayson a popular local win, ahead of a trio of Australian crews.

Another local pairing, that of Duncan McCrostie and Murray Marshall, rounded out the top five in their Nissan Bluebird Turbo.

Only 21 of the original 39 classic starters finished every stage of the
event, proving that consistency and reliability were the keys to
success.

Despite his disappointment, McRae loved every minute of his Otago Rally
experience, and hopes to return to the event again in 2010.