Winning outright last year’s final rally and round of the Brian Green Property Group New Zealand Rally Championship (NZRC), Palmerston North businessman Brian Green has again committed to contesting the six round series by being the first entry received for the 2013 season.

Beginning with the Drivesouth Rally of Otago from 6 to 7 April, Green
and Hawke’s Bay based co-driver Fleur Pedersen will campaign a
Mitsubishi Lancer Evo X at all rounds. New Zealand’s most prolific and
experienced rally driver the winning duo have double championship titles
in Malaysia and have been regular category contenders in the FIA Asia
Pacific Rally Championship (APRC). As well as extending his businesses
support to the NZRC for his third year, Green has upped his input by
adding funds to New Zealand’s round of the APRC. Also the second round
of the Championship – the International Rally of Whangarei, in
association with the Brian Green Property Group is both a strategic move
and extension of his passion says the property developer. 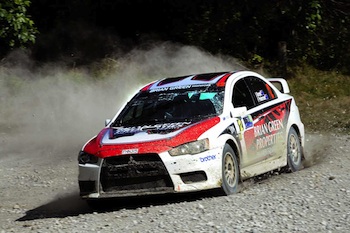 Brian Green has committed to the 2013 NZRC.“We
enjoy the sport and will keep participating as long as we can. From the
commercial side we’ve had a couple of opportunities arise from being a
part of the championship. When that happens it gives us return and
reward for what we’re doing. Now with Whangarei hopefully we can reach a
bit further, given it’s an international event, and get a deal done
through one of the overseas competitors – who knows?”

Getting
their entry in early was a case of being prepared for a long season says
Green. Their documentation, travel and accommodation for the events
they will contest are ready booked up to September.

“We’re in
business and obviously very busy so we try to get things organised
properly and get things like our championship entry done early on,”
added Green.

Entrants to the 2013 Brian Green Property Group New
Zealand Rally Championship are currently at 28, with close of entry
just under a week away. A who’s-who of current and former champions
there are several new entrants across each of the three competition
categories. More than 17 are currently listed in the Super Rally field,
supported by Auto Finance Direct. Eight are so far contesting the BNT
Historic Rally Challenge with entry to the one day Gull Rally Challenge
adding to an improved formula for 2013.

Following the opening
round in Dunedin from 6 to 7 April the series heads north for the FIA
Asia Pacific Rally Championship round at the International Rally of
Whangarei in association with the Brian Green Property Group (17-19
May). The rest of the season is then one day events: Daybreaker Rally
(Manawatu, 29 June), Canterbury Rally (10 August), 10th Anniversary
Possum Bourne Memorial Rally, sponsored by Vantage (7 September) with
the final being held at the Trusthouse Racetech Rally Wairarapa (5
October).