2007 Otago Classic Rally winner, Deane Buist, returns to the event this
year, hoping to repeat the success he tasted two years ago.

Buist won the 2007 rally driving a Ford Escort RS1800, but sold the car
not long afterwards. He returned to defend his title last year, but at
the wheel of a Toyota Corolla powered by the popular BDA engine.
The Corolla also has the drivetrain and rear axle from an Escort, and while it didn’t handle as well as the Ford, Buist still managed second place, but had to play second fiddle to the Porsche 911 of Finnish star Pasi Hagstrom.

“Last year we had no intercom for the first two stages, so our plan was to try and beat the rest as we knew trying to beat Pasi would probably end in tears,” the laconic Buist says.

The Christchurch driver’s task won’t be any easier this year either, with Scottish hero, Alister McRae, making his debut in the classic rally at the wheel of an Escort RS1800. 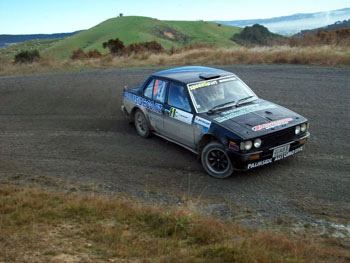 Dean Buist is hoping for his second Otago Rally win.“This year we will run with the same approach as in 2008, which was to try and beat the rest. Alister will drive with more commitment than us,” he adds.

While McRae is expected to start as the favourite in the Classic Rally, Australian Ross Dunkerton is hopeful of challenging the ex-WRC driver in his recently purchased Escort RS1800.

Dunkerton, a five-time Australian Rally Champion, is an Otago Rally regular, but this will be his first time behind the wheel of the iconic Escort. In his hey day in the 1970s and 1980s, he was a factory Datsun driver, so many may see his Ford entry as a move onto “the dark side”.

The rally will include famous stages such as Kuri Bush, Whare Flat, Waipori Gorge and McIntosh Road, as well as the popular spectator stage around the streets of Dunedin.

The rally begins with a Rally Show on Friday night, May 15, with the rally proper being held on May 16 and 17.