Both technical and tactical rules have been overhauled for 2013 in an
attempt to attract more participation at the top end of NZ rallying –
and judging by the 33 championship entries received for this opening
round of this year’s six round series, the changes appear to be proving
attractive to competitors.

Technically the rules have been
‘relaxed’ to allow teams more flexibility in how they setup their cars
and BNT Mason Motorsport has taken advantage of some of these changes,
but largely chosen to keep their BNT Subaru close to its original FIA
Group N spec in what Richard describes as ‘Group N plus’.

“As we
have done so successfully for the last couple of years, when we have
won our latest two titles, we have opted for a somewhat conservative
approach with reliability as a priority,” said Richard.
“So it will
be very interesting to see how we actually measure up against some of
the lightweight ‘rocket ships’ we hear have been built and tested during
the off season. 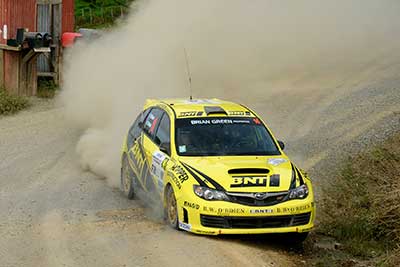 “And with Hayden [Paddon] coming back with his
high-spec R4 Evo9, there’s no doubt he will set the benchmark to chase
and we will be doing our best to keep up with him.”

Tactically,
there are also significant changes to deal with in 2013 as the top 5
starters get to choose their starting position for Saturday’s opening
leg at Friday evening’s Ceremonial Start in the Octagon.

In
recognition of their current championship winning status, and as the
winners of last year’s Rally Otago, the Masons are Car # 1, so they will
get first pick of where they want to start on the road.

“This
could well be a deciding feature of the rally,” said Richard, “as the
correct road position is vital for posting winning stage times. If it
stays dry then dust could be an issue, so going first could be the thing
to do. However with all the dry weather this summer there is likely to
be a lot of loose gravel on the roads, so the first few cars would be
like road sweepers brushing this aside and creating a clean racing line
for the following cars. And then if it rains you want to be running at
the front of the field before the roads get churned up….

“So
Recce will be very important as this gives us a chance to check out the
roads, while monitoring the weather forecasts for the weekend will also
be a priority.”

And, regardless of the overall standings by
then, the flat-out high-speed action will go right down to the end of
the very last stage on Sunday, as this year the popular Power Stage
carries even more significance than previously where vital Bonus Points
were up for grabs for the fastest drivers.

Richard explains:
“Not only is there now 5 points for being fastest – last year it was 3 –
but also whoever wins the Power Stage gets first pick of their road
position at the next round, so it is even more important that your car
is in top shape for the whole event – and the $500 prize money wouldn’t
go amiss either…”

And, just to add another twist, this year's
Rally Otago will differ significantly from the most recent editions by
venturing much further north of the host city Dunedin – as far as Oamaru
– and will use classic rally roads such as Danseys Pass.

"So
there is a lot of ‘new’ territory to cover and it will be great to drive
some of these stages and mix them with our regular annual favourites
like Kuri Bush and Waipori Gorge, and it should all make for quite a
challenge," said Richard.

"However, although our natural
instinct is to go to every rally looking to win, this year our absolute
priority for Otago has to be to take away a top points haul to lay the
platform for our [NZRC] title defence and start our eighth season under
BNT sponsorship in the best way possible.”