Emma Gilmour has confirmed that she will be back behind the wheel of her Suzuki Swift Maxi rally car for the 2014 New Zealand National Rally Championship, with the experienced Australian, Ben Atkinson, as her co-driver for the six-round series.

After treating 2013 as a development year for her highly modified Swift,
Gilmour states that her aim for the season ahead is to press for
victory.

“Last year we were certainly on a steep learning curve
with a brand-new home-built car, but by the end of the season we had
started to find the right combination of speed and reliability,” she
says. “Further development work and testing over the summer has taken
the car to the point at which I am confident it will be good enough to
compete for outright honours.” 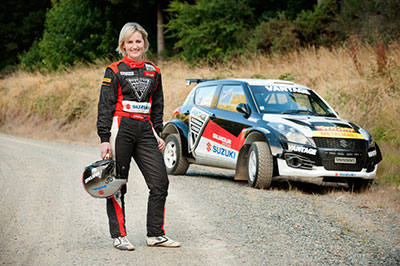 Gilmour is delighted to confirm
Ben Atkinson as her co-driver for 2014. The brother of Australian world
rally championship driver Chris Atkinson, Ben’s extensive rallying CV
includes co-driving for his brother in the WRC, and for fellow
Australian Cody Crocker on the Asia-Pacific Rally Championship.

“Ben
has competed at the very highest level in the sport and has been an
international championship winner as a co-driver, so the experience he
brings to the team will be really valuable,” says Gilmour. “He has sat
in the co-driver’s seat for me before and we worked really well
together, but this is the first time we will be contesting a full
championship together.”

The change of co-driver aside, the core
of Gilmour’s team remains unchanged from last season, with Lindsay
Tressler from Gore continuing to prepare the Suzuki between events.