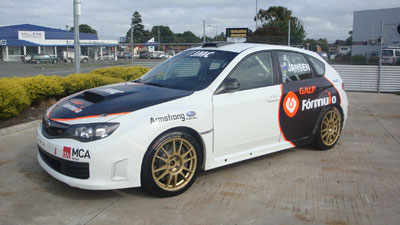 Matt Jansen’s Prodrive built Subaru WRX.2009 Rookie and Junior New Zealand
Rally Champion, Matt Jansen, will be behind the wheel of a new version
of his successful MITECH WELDERS Subaru for the 2011 rally season.

The
23 year old Cantabrian has just taken delivery of a Prodrive-built 2010
N15 model Impreza WRX that is virtually brand new, having only
contested a handful of tarmac rallies in Portugal last year.

"We
are delighted to have been able to get such an up-to-date version,"
said a very happy Matt, "and to get one that has been built by Prodrive –
renowned for their experience with Subaru in the World Rally
Championship – is a real bonus…"

"We thought long and hard
about the options of building a new car ourselves or buying an existing
one, but when I found this one for sale on an international website, it
didn't take long to decide which way to go."

Matt plans to have
the car out on as many rallysprints and hillclimbs as possible, with his
first full rally being at Westland on March 19th.

"The new car
is left-hand-drive, so it is vital that I get as much time behind the
wheel as I can to be ready for Otago [Rally Otago – the opening round of
the New Zealand Rally Championship in early April], and to give the
guys [the PMT Motorsport Service Crew] plenty of opportunity to
familiarise themselves with how it works too."

"Last year we
never quite got ourselves onto that all-important podium pace that is
our current NZRC goal, but we know that this investment will give us the
best shot at achieving that…."