Mason back to defend NZRC title

Having won the Gold Star New Zealand Rally Championship title for the third time in 2011, Richard Mason and co-driving wife Sara have confirmed they will defend the title in 2012. 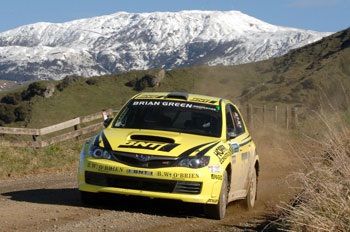 Richard Mason will defend his NZRC title in 2012.“Thanks to BNT and all our other long term supporters, we are very
pleased to be back to have the opportunity to go for our fourth national
championship title,” says Mason, who will be competing in his eleventh
national rally championship this year.

“We feel that the changes made to the points’ structure of the NZRC are
for the better and, after consultation with BNT as to where they saw our
partnership developing into the future, remaining at the 'sharp' end of
New Zealand's most competitive rally series is where we will stay.

“And it is always a ‘special’ year when Brother Rally New Zealand is a
round of the World Rally Championship. There is nothing like competing
against top international crews to bring out the best in you and your
team.”

Having won two of the three rounds in 2011, Mason adds: “As usual, we
have done more research during the off-season as we strive to get the
best possible setup and handling for our BNT machine and, as a result of
what we have done, we are quietly confident 2012 will be another good
year for us. However, no matter how much testing you do, it’s not until
you start comparing stage times in the white-hot heat of an NZRC rally,
that you really get to know just how quick you are actually going….”

The Masons begin their title defence at the Brother International Rally
of Whangarei, which is the opening round of the Brian Green Property
Group New Zealand Rally Championship, powered by Brother. From there
they will contest events in Wairarapa, Otago and Gisborne as well as
Brother Rally New Zealand in June.