Current leader of the Brian Green Property Group New Zealand Rally Championship driven by VINZ, Richard Mason, has been the class of the NZRC field in their BNT Subaru on the opening day of the Drivesouth Otago Rally. Following Mason home were Chris West and Emma Gilmour.

Mason and co-driving wife Sara took advantage of first pick at last
night’s road order draw to start first on the damp roads and showed
their class to record stage wins on each of the days seven stages. The
most impressive performance on the day saw the Masons being 42 seconds
faster than all of their opposition on the 50km Manuka Hill stage. 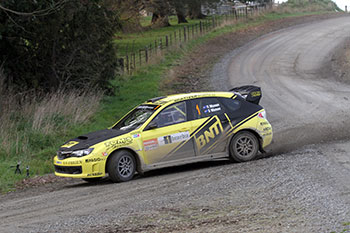 A
strong battle for second place was brewing in the morning between local
driver Emma Gilmour (Vantage Suzuki Swift Maxi 1600), Ben Hunt (Winger
Subaru) and Chris West (Andrew Simms Mitsubishi). Unfortunately for
Hunt, he lost close to five minutes with an electronic problem, dropping
him to 13th for the day.

With a string of five second fastest
stage times West secured second, just over one and a half minutes behind
Mason and 27.2 seconds ahead of third placed Gilmour. David Holder and
Lance Williams rounded out the top five, with Williams just slipping
past Andrew Hawkeswood by three tenths of a second on the day’s final
stage.

Max Bayley again put together a consistent
run in his Ford Fiesta to lead Category Two, while the Category Three
lead currently sits with the Brent Taylor in his Toyota FT86, 51 seconds
ahead of the Toyota Levin of Hamish Anderson.

The one day
Category Five class saw Darren Galbraith take the win after Jeff Judd,
who was fastest across the stages, received a time penalty for lateness
that dropped him to second place. Jeff Torkington took victory in the
two-wheel drive side of the class for the second event in a row.

The
action continues tomorrow with a further 142.64km of special stages
centred around Lake Waihola before the ceremonial finish at the Dunedin
Railway station at 3.25pm

The 2014 Brian Green Property Group New
Zealand Rally Championship driven by VINZ is contested over six rounds
commencing in April at Whangarei, followed by events in Dunedin,
Christchurch, Masterton, Whitianga and wrapping up in the Manawatu in
late September. 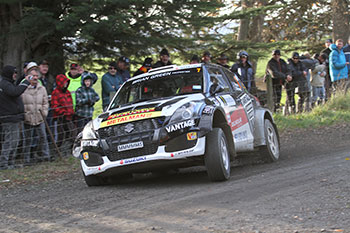