Mason on course for Rally of Otago victory

Mason and his co-driving wife, Sara, put their Subaru into a clear lead over Chris West's Mitsubishi, as Sloan Cox slipped to third.

The big drama of the day happened on the second stage when championship leader, Alex Kelsey, destroyed his Subaru Impreza. 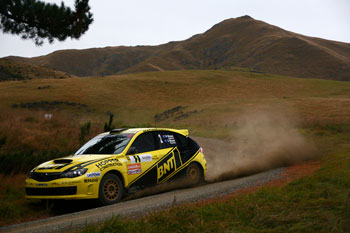 Richard Mason is well clear of the pack after Day 2.Kelsey and his co-driver, "Crunch" Bennett were uninjured, but the stage was cancelled.

Local favourite, Emma Gilmour, had a challenging day that included a big
spin on stage eight, and finished with a blown turbo on the day's final
test. Yet she still remains in fourth place and is eyeing off a podium
finish.

Matt Jansen has his Subaru in fifth place, ahead of the sole Ford Fiesta
S2000 of veteran driver Dave Strong, and Dean Bond's Lancer Evolution.

But it's Mason that appears to have the event in his grasp, barring any last day complications. 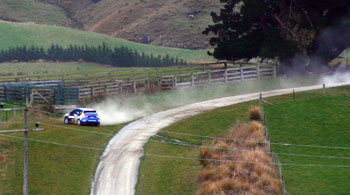 Emma Gilmour spins her Subaru on special stage eight.The Allcomers Rally is being led by Rhys Gardner in a Lancer Evo 7, a
massive six and a half minutes clear of Paul Dickson's Lancer Evo 3.
Carter Strang (Toyota Levin) is third, a further three minutes in
arrears.

The final day of the Stadium Cars / Nichibo International Classic Rally
of Otago will see competitors tackle another six stages and 130
kilometres, before the finish at the historic Dunedin Railway Station.