Richard and Sara Mason, the husband-and-wife rally driving duo from Masterton, led from start to finish at this weekend’s Drivesouth Rally Otago to win the rally and take the lead in the 2012 Brian Green Property Group New Zealand Rally Championship, powered by Brother (NZRC).

The Otago event is the third NZRC round of the season and Sunday’s conditions included bouts of strong winds during the morning stages, especially across the ridge-tops, before teams returned to an unseasonably calm and warm Dunedin for the afternoon ceremonial finish.

When the event got underway with three stages run in the dark on Friday,
the Masons took an early lead of 35 seconds over Rotorua’s
brother-and-sister pairing Sloan and Tarryn Cox. On Saturday, despite
determined challenges from Cox and the other leading crew Timaru’s Chris
West and Chris Cobham, the Masons extended their lead to 53 seconds
after eight further competitive tests. And by the end of Sunday, the
Masons came home with a comfortable margin of two minutes 13.7 seconds
over West, while Dunedin’s Emma Gilmour and co-driver Anthony McLoughlin
wrapped up the event’s 17 stages third overall. 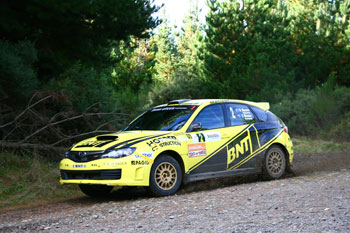 Richard Mason have taken the lead in the NZRC.Winning both legs in Otago earned the Masons maximum points toward the
five round NZRC series, and the defending NZRC champions also set the
quickest time in the power stage to earn three bonus points. Richard
Mason, in the overall NZRC drivers’ championship, now has 90 points, 20
ahead of Gilmour in second place.

“We’ve ticked another one up – the second in a row for the year,” said
Mason. “So we’re very happy with that. “Thanks to BNT, our car ran
faultlessly this weekend. We’re taking home a maximum points’ score and
cemented a good lead in the NZRC.

“Yesterday was a bit heart-stopping a few times with the fast turns and
twists over the Otago crests and we had a big moment at the end of the
Berwick (SS16, 44.15km) stage.

This rally victory means Mason is one shy of triple New Zealand rally champion Neil Allport’s record of 22 round victories.

Sunday’s six stages were won equally by Mason and West, but West’s luck
was again tested when he spent nearly one and a half minutes stopped in
the penultimate Berwick stage. Required to repair the gear selection
cable in his Lancer Evo 9 before he could continue, the former national
rally champion’s runner-up position was then at risk with Gilmour
cutting the margin to less than 25 seconds. 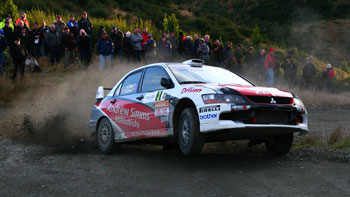 “It’s been good – to take the win today,” said van Klink. “We were so
lucky it went our way as this morning I had a moment where I didn’t hear
the co-driver and nearly went off the road. It did a wee bit of damage
so we were lucky to climb out with a win.”

Open two-wheel-drive (2WD) competitor Tony McConachy and Simon Johnstone
from Palmerston North headed class leader Dave and James Holder to win
that category. McConachy finished one minute, 48 seconds ahead of the
Holder brothers after both crews had their share of troubles during the
event. The top ten for NZRC-registered competitors was wrapped up by
another historic pairing, Hamilton’s Miles McElwain and Dennis Carson.

Nineteen year old Alex Kelsey, from Coromandel, who led the series going
into the Otago event, had a high speed crash on Saturday morning which
destroyed his Subaru WRX, seeing him slip down the point’s standings to
third.

News and information about the championship – including driver profiles
and team news – can be found on the website
www.nzrallychampionship.co.nz, or follow New Zealand Rally Championship
on Facebook. 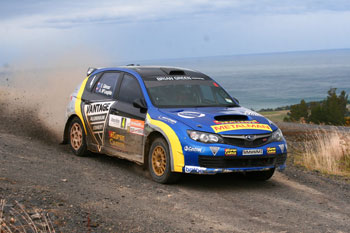