The Flying Scotsman, Alister McRae, holds a commanding lead after the first day of the Dunlop International Classic Rally of Otago in Dunedin.

Driving a Ford Escort RS1800, McRae and co-driver, Erin Kyle, hold a one minute and 34 second lead over the Nissan-powered Escort of Derek Ayson, while Brad Goldsbrough is the first of the Australians in third place in his Datsun 1600.

A high attrition rate has seen many of the more fancied crews fall by
the wayside, including former winner, Deane Buist, who rolled his
Toyota Corolla, and Aussie Darryn Snooks, who suffered numerous
mechanical problems in his Datsun Stanza.

The first day of the Dunlop International Classic Rally of Otago was
held in fine, but windy weather, with eight stages totalling 132
kilometres of competitive driving. 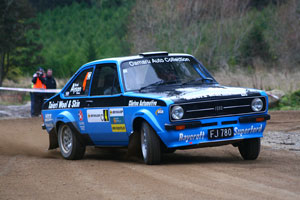 Derek Ayson is second after Day 1 of the Classic Rally.McRae was fast out of the blocks, beating everyone by at least 17
seconds on the first 12.85km stage at Whare Flat, and he was never
headed from there on. His BDA Escort, prepared by Bryce Biggs, ran
reliably throughout the day, although a gearbox drama late in the day
saw the Scotsman having to hold the car in second gear.

“We’ve had a fantastic day,” McRae said. “The car’s gone well, the
roads have been sensational, and I can’t wait to get out there again
tomorrow.”

Deane Buist’s charge ended when he rolled his BDA-powered Corolla on
his favourite stage, McIntosh Road. While he rejoined the rally later
in the day, his hopes of repeating his 2007 victory are over – at least
for another year.

Both Ayson and Goldsbrough have been impressive and are still in with
chances of standing on the top step of the podium, should McRae have a
problem on Day 2. Another Australian, Jeff David, drove brilliantly on
his Otago debut, putting his Porsche in fourth place at the end of the
day, with a six second gap over Ross Dunkerton.

An Otago Rally veteran, Dunkerton spent his day coming to grips with
his newly purchased Escort RS1800, and got quicker as the day wore on.

Local speedster, Duncan McCrostie, is sixth in his Nissan Bluebird
Turbo after the first day, well clear of Brent Rawstron in seventh.

Brad Goldsbrough lifts a wheel in his Datsun 1600.Darryn Snooks had hoped to better his eighth place from 2007, but
accelerator and suspension problems saw him stranded on two stages
during the day. Fellow Aussie Keith Callinan also had a shocker, first
breaking a ball joint on his BDA, then a gearbox.

Regan Ross impressed on this event last year, but he left the road and
retired on stage seven, despite winning stage three – the only gravel
stage McRae didn’t take the honours on.

Tomorrow sees a further six stages and 124km of competitive driving,
before the finish back in the centre of Dunedin at around 3pm. 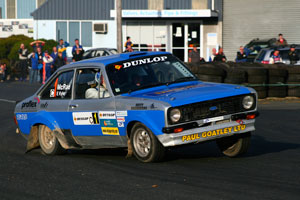 McRae thrills the crowd on the tarmac street stage.