Geraldine’s Hayden Paddon has a near three minute lead on his rivals after today’s opening eight special stages in the two day Drivesouth Rally of Otago, the opening round of the Brian Green Property Group New Zealand Rally Championship.

Second, after successive punctures up-ended their early rally lead,
Masterton’s Richard and Sara Mason are 35 seconds ahead of a spirited
and credible drive by Nelson’s Ben Hunt – in his first event behind the
wheel of a Subaru.

The first round of six events for the 2013
title today’s superb autumn weather gave little comfort to the sizeable
number of entrants who failed to score valuable championship points. A
journey of 410.17km over roads north of host city Dunedin, reliability
became a bigger test. While many of the 31 championship contenders who
started will re-join for tomorrows concluding eight special stages they
will be playing catch-up.

First casualty was Christchurch’s Matt
Jansen who suffered terminal engine failure 400m in to the opening
special stage. Coromandel’s Alex Kelsey then suffered a suspension fault
a further 8km on while continual brake problems then front differential
failure side-lined former champion Chris West’s Mitsubishi Lancer Evo X
mid-way through the day. He was joined by the spectacular Audi Quattro
of Auckland’s Andrew Hawkeswood, having picked up a small stone between
the cambelt and the cam gear – damaging the engine’s valves. Defending
BNT Historic champion Marcus van Klink suffered a rear differential
failure with a total of ten team’s home and showered early. 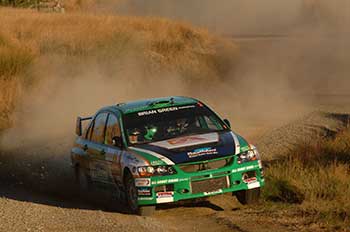 Hayden Paddon on his way to a convincing Day 1 lead in Otago.By contrast, Paddon was relieved to have such a significant leading margin after an issue in the opening two stages.

“We
were quite lucky this morning – suffering a fuel pickup problem and
were lucky to get through the first few stages,” said Paddon.

“The
car was fun to drive although it handles quite differently to last time
[it was used in an event] – after the chassis changes we’ve made. But
the times were encouraging despite the large amount of gravel on the
road we were helping to sweep through. It’s been a while since I’ve run
first car on the road to be honest but those stages north of Dunedin and
west of Oamaru are famous for their marble nature. Tomorrow’s stages
are more traditional in style and won’t have the same gravel to sweep.”

Competing teams have to put their cars in parc ferme
for the night before the resumption of the event tomorrow morning – post
daylight saving time.
The eight concluding special stages totalling
120.48km will be held closer to the city centre – starting with the
28.70km Ramrock road, inland from Karitane from 7:40am. Following the
10.75km Moonlight stage crews get a service break in Middlemarch before a
further two stages and the repeat of the Moonlight Rd. The following
service is a last break before the sprint to the end and includes the
12.66km Waipori Gorge and 15.05km Kuri Bush. The climax is the 10.94km
Whare Flat – a stone’s throw from the city centre. Fastest championship
team through this nominated ‘power stage’ earns an additional five
championship points and $500 – for each of the three categories. Prizes
are awarded down to third and points down to fifth.

The survivors then journey the remaining 10km to the Dunedin Railway Station and the ceremonial finish, from 3:25pm.

News
and information about the championship – including driver profiles and
team news – can be found on the website www.nzrallychampionship.co.nz,
or follow New Zealand Rally Championship on Facebook.

Results from day one: Drivesouth Rally of Otago