A punctured tyre has ended Hayden Paddon's hopes of winning the Stadium Cars / Nichibo International Classic Rally of Otago for 2012.

Paddon was dominating the event in a brand new Ford Escort RS1800 and held a one minute and 20 second lead after eight special stages, but his victory hopes were dashed on the very next test.

He punctured a right rear tyre, and when the damaged tyre couldn't be
removed mid-stage, the Geraldine driver had to complete the stage on the
flat, and he dropped over seven minutes.


"We stopped to change the puncture, but we didn't have the necessary tools onboard to do so, so instead crawled out the remaining 10km, costing us a massive seven minutes," Paddon said.

"Nevertheless we are still up beat and enjoying every minute of driving this awesome car. Really looking forward to the stages tomorrow, and in particular Kuri Bush."

This gave multiple winner, Derek Ayson, the lead in his Nissan-powered
Escort, and he held this to the end of the second day. He now leads
Marcus van Klink in a Mazda RX7 by 19.1 seconds.

van Klink is a further one minute and nine seconds clear of Australian
Geoff Portman in an Escort, followed by local driver Duncan McCrostie in
his Nissan Bluebird turbo. 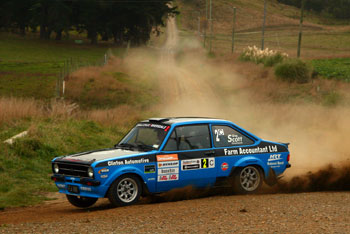 Derek Ayson is on track for a fourth Otago Rally win.Paddon now lies in fifth place, but is a massive five minutes and 27
seconds from the lead, although the reigning Production World Rally
Champion will still be fancying his chances of a podium finish.

After brake problems on the first night, Welsh driver, Gwyndaf Evans,
struggled with a mis-firing engine on his Ford Escort, but still held
sixth place. But then an electrical problem sidelined the former British
Champion, who missed two stages, before rejoining for the final super
special stage around the streets of Dunedin.

Aussie Grant Walker is sixth in the second 'Grant Walker Parts' Escort
after a strong start to the event, half a minute clear of
Australian-based New Zealander, Mike Townshend in his Toyota Corolla
AE86.

The ever-present Merv Hatcher has his Mitsubishi Starion in eighth,
ahead of Dunedin's Mark Laughton in a V8-engined Hillman Avenger, and
Miles McElwain (Toyota Corolla). 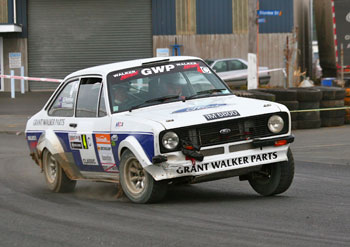 Aussie Geoff Portman is third in his Escort BDA.The final day of the Stadium Cars / Nichibo International Classic Rally
of Otago will see competitors tackle another six stages and 130
kilometres, before the finish at the historic Dunedin Railway Station. 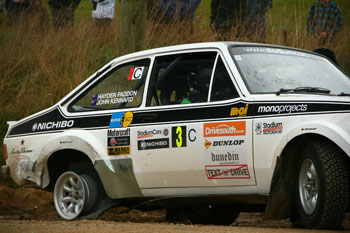