Fine and sunny weather is predicted for both days of this weekend’s Rally of Otago, with competitors in all three events champing at the bit to get things under way.

This year’s rally includes the first round of the New Zealand Rally Championship, the popular Dunlop International Classic Rally, and the Allcomers Rally, giving rally fans over 85 cars to watch over the stages in and around Dunedin this weekend.

In the absence of reigning national champion Hayden Paddon, former
winner Richard Mason will start as the favourite in the NZRC round,
driving his Subaru Impreza.

Mason recently became a father and his wife, and regular co-driver,
Sara, will be sitting the Otago Rally out. Her place will be filled by
his former co-driver, Hamish Fenemor, although most predict that the
change will have no effect on his chances of victory.

A two-time winner of the event, Mason is almost an unbackable favourite
to win the event, although former local girl, Emma Gilmour, will be
fighting hard to take her first Otago Rally victory.

Gilmour will drive the Subaru Impreza that Cody Crocker used to win last
year’s Asia-Pacific Championship, and is confident the new car will
give her an advantage. A successful test south of Auckland recently has
her confidence high.

Andrew Hawkeswood returns to the national championship in his Mitsubishi
Lancer and is a big chance for a podium finish. Hawkeswood virtually
destroyed his Lancer on the final stage of last year’s event when he hit
a steel gate, but still managed to finish the rally in third place.
He’ll be hoping to keep the car straight this year.

The entry list includes some of New Zealand rallying’s fastest drivers,
including Geof Argyle, Chris West and Dean Sumner. The field is
dominated by four-wheel drive Subarus and Mitsubishis, with any one of
up to 10 drivers in with a realistic chance of finishing on the podium. 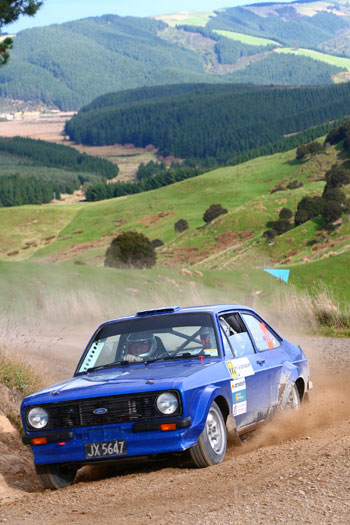 Brilliant scenery is a feature of the Otago Rally.The battle among the front-wheel drive Ford Fiestas will be keenly
contested as well, with Stephen Barker, Ben Hunt and Dermott Malley all
vying for honours. Former Honda stalwart, Dave Strong, will be Fiesta
mounted as well, but his car is a four-wheel drive Super 2000 variant,
and will sound magnificent in the forest.

The Rally of Otago is round one of the five round New Zealand Rally
Championship series.

The Dunlop International Classic Rally of Otago field is headed by 2009
winner, Derek Ayson, in his Nissan-powered Ford Escort.

The Italian has never driven an Escort before, but his results speak for
themselves, and as the winner of the 1997 Monte Carlo Rally for Subaru,
he’s expected to set the pace.

While Liatti has the credentials, Ayson will start as favourite because
of last year’s win, and with his knowledge of the areas being used in
the event.

Kiwis Regan Ross (Escort), Jeff Judd (Vauxhall) and Duncan McCrostie
(Nissan) will be keen to perform well, as will a host of Australian
drivers who are heading across the Tasman for the annual event.

Spencer will drive a powerful Datsun 1600, as will fellow Queenslander
Stewart Reid. Reid was a former Australian Rally Championship
front-runner and has driven a variety of cars over many years. He could
be a dark horse.

Up and coming Victorian driver Mike Conway could also be one to watch as
he makes his Otago Rally debut in an Escort. His Escort runs a 2-litre
engine and will be lacking the power of the BDA-engined cars, but he has
shown plenty of speed in recent months, including finishing well in
last November’s Alpine Rally.

Twenty-five cars will also line up for the Allcomers Rally, with the
event likely to see a domination by Mitsubishi’s Lancers.

Dean Bond and Cleve Kokshoorn head the entries and will start as
favourites, but another driver expected to push for victory is Andrew
Graves in a Lancer Evo 3, with Steve and Mike Wellington being Dunedin’s
best chances of a win in their Lancer Evo 6s.

The Otago Rally route will include some of the event’s most popular
stages, including Kuri Bush, Whare Flat, Waipori Gorge and the tarmac
super special stage around the streets of Dunedin.

For the first time since 2001, the famous Danseys Pass – a classic
sub-Alpine road that was once used in the Rally of New Zealand – will
also be included in the route.

“The rally will be a return to the way things were done years ago, with
no centralised service parks, longer touring stages, and with a real
emphasis on adventure,” Oakley said.

“We’ll return to the Middlemarch area for stages that were used in 2009,
but we’ve also included new stages such as Ritchie Road and Shag Valley
Back Road that have never been used by the event before.”