Rabbidge to compete in Otago Rally in half his Escort!

Veteran Timaru rally driver Carl Rabbidge is set to re-appear on the competitive New Zealand National Rally scene, for the first time in 25 years, at the Dunlop International Classic Rally of Otago this weekend, but with only half of his Escort. 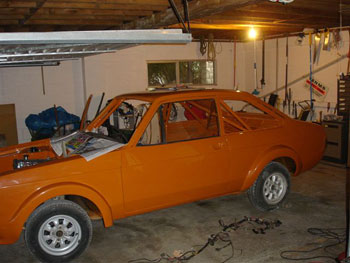 Carl Rabbidge will make his driving comeback in a Ford Escort.Rabbidge was set to make his driving comeback in his old faithful (last
used in 1980) MKII Ford Escort RS2000, but a minor setback with delays
in the arrival of some components to complete re-assembling the car in
time, and has meant borrowing half a car, a body shell, from good friend
Bryce Biggs’ stable to be able to compete.

This last week has seen Rabbidge’s motor and gearbox fitted into the
Biggs car, and while Carl does not expect to set the rally scene alight
initially, he does expect by seasons end to be competing for top
National Championship Historic Challenge Class placings.

Rabbidge who started his rallying back in 1970 driving a Ford Anglia
Van, has been around the scene driving and co-driving, as well as
mentoring young drivers for the last 4 decades. His latest rallying
involvement comes as Rally Manager and Route coordinator for the
successful NZ Silver Fern Classic Marathon events.

Carl says “I had watched all these middle aged (and older) drivers
competing in and enjoying the Otago Classic Rally, and the NZ Silver
Fern Rally, and thought well why not, if they can still enjoy it why
should I stop just because I’m getting older, so I decided to resurrect
the old car and have a go again”.

Co-driving this weekend is Christchurch’s Barry Varcoe, a driver in his
own right. The team are seeded 19th in the field of 34 “classic” cars.