Derek Ayson and Greg Scott have claimed their second consecutive Dunlop International Classic Rally of Otago victory, with a 21.9 second triumph in their Nissan-powered Ford Escort.

Ayson totally dominated the event, winning 11 of the 16 special stages
over the two days of the rally in fine, warm and dusty conditions. 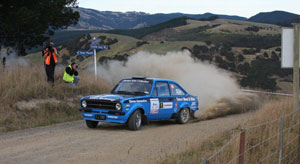 Derek Ayson won his second Otago Classic Rally in his Escort.The second day of the event was drama free at the top of the Classics
leader board, with Regan Ross maintaining his second place in his Ford
Escort RS1800, while Italian star, Piero Liatti, finished third in
another BDA Escort.

If fifth place after a great drive was Shane Murland and John Benton in
another Ford Escort RS1800, while Stewart Reid and Iain Stewart were the
first of the Australian competitors home, in sixth place.

Further down the field there was lots of drama. Robert Van Gisbergen had
been seventh in his Ford Escort RS1800, but retired when the rear wheel studs stripped and he lost a rear wheel just 1.5 kilometres from the end of the final stage.