The Europeans are coming!

The 2008 Otago Classic Rally should see an increase in the number of
high-profile European drivers heading down under for the southern
hemisphere’s premier classic rally. 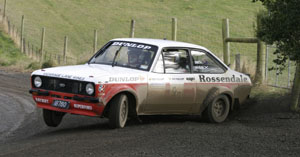 Jimmy McRae won the Otago Rally in 2005The well-drilled Rossendale Rally Team, under the guidance of Brent Rawstron, are planning to run a two-car team in next year’s event, with star European drivers high on their shopping list.

The Rossendale Team won the event in 2004, 2005 and 2006 with drivers of the calibre of Pasi Hagstrom and Jimmy McRae, as well as bringing out former World Rally Champions Bjorn Waldegard and Juha Kankkunen. Hannu Mikkola has also competed in the event, in a BDA Escort run by Jeff Judd.

For next year’s event the Rossendale Team are currently building a brand-new left-hand drive Ford Escort RS1800, and while no names have been mentioned yet, insiders say that the “star” driver may not be a rally regular. A driver with a background in another discipline of motorsport, it appears, is not out of the question.

Next year’s Otago Rally will be held on May 10 and 11 and will also count as a round of the New Zealand Rally Championship, featuring the latest in Group N 4WD turbo rally cars. 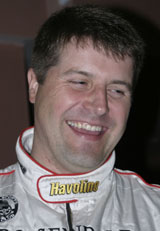 Pasi Hagstrom – two-time winnerClerk of Course, Norman Oakley, said that plans for next year are well under way.

“We look like providing competitors with 14 special stages — seven each day — for a total competitive distance of around 250km,” Oakley said.

“Favourite stages of the Otago Rally, such as Whare Flat, Kuri Bush and Waipori Gorge will again feature, as will the tarmac stage around the streets of Dunedin. In 2008 we won’t be running the Forbury Park trotting track stage,” he added.

Much of the 2008 rally route will be new to all competitors, which should mean that prior knowledge of the Otago Rally will count for little.

As well as a strong presence from the northern hemisphere, Australians are also likely to appear at the Otago Rally in large numbers. Many Aussies who have previously competed in the rally, such as Darryn Snooks, Michael Boaden and John Hills, are expected to return, while organisers are aware of many other Aussies keen to get their cars across the Tasman and onto the start ramp.