Two from two for Masons in Otago Rally

The Masterton husband and wife pairing of Richard and Sara Mason have taken their second round victory in a row after another impressive performance at the Drivesouth Rally of Otago, round two of the 2014 Brian Green Property Group New Zealand Rally Championship driven by VINZ.

The Masons in their BNT Subaru dominated the event and looked to again
be on for a clean sweep of stage wins, but were forced to stop and
change a puncture in the 40 kilometre Terrace Range stage, losing three
minutes. That stage also claimed Emma Gilmour’s Suzuki Swift, which
retired with fuel pump failure after sitting in second place with four
stages to run. 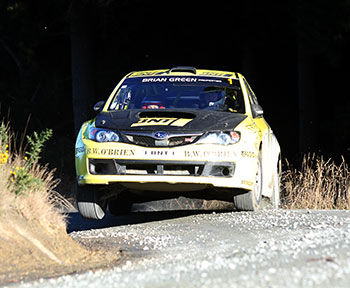 Sitting in second place overnight, Chris West
suffered a high-speed accident on the day’s opening stage when he was
blinded by sun strike. Emergency procedures saw the stage stopped with
both West and co-driver Chris Cobham heading to hospital, although both
were checked out and released with only minor injuries.

The retirement
of West and then Gilmour promoted David Holder to second place while
after a day long battle, Matt Jansen emerged in third ahead of Andrew
Hawkeswood. Lance Williams rounded out the top five placings. Nelson
Subaru driver Ben Hunt scored his first points of the season by securing
leg two honours for fastest over the days stages.

Category
4 (Historic) saw Marcus van Klink lose ten minutes when he slipped off
the road in the Terrace Range stage, leaving Ron Davey to take the leg
two victory, although van Klink’s Mazda RX-7 still held on for the round
victory. Third overnight, Andy Martin was also a victim of the Terrace
Range stage, breaking an axle in his Mazda RX-3.

The NZRC now heads to Rally Canterbury on June 1. 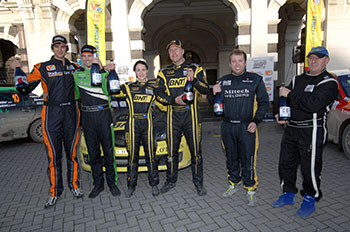