Once again the Otago Rally lived up to expectations with a fantastic battle for the lead and an historic win by New Zealand WRC star Hayden Paddon. Peter Whitten takes a look at some of the more interest aspects of the 2015 event, and on the state of New Zealand rallying. 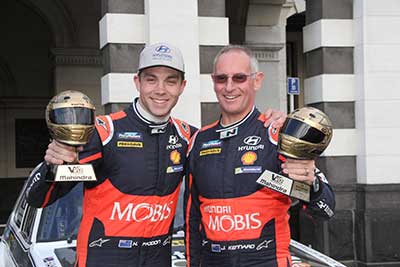 Hayden Paddon claimed after the event that he is not superstitious, but then joked that he is considering skipping next year’s Otago Rally, despite winning the Classic and NZRC event this year.

“It has also been amazing to see the amount of spectators out on the stages – the most I have ever seen in a New Zealand national championship round.

“There was a bit of attrition here this weekend, but the state of NZ rallying is in very good shape – big fields of cars (modern and classic), heaps of fans and the best roads in the world. Sounds like a good recipe for the return of Rally New Zealand :)”

Despite this, Paddon is expected to return in 2016 in the Stadium Cars BDA. 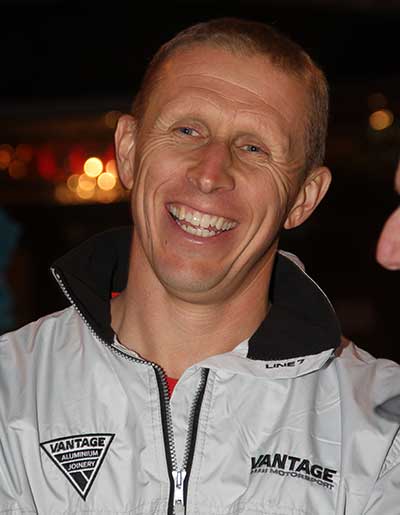 As expected, Alister McRae received a phone call from his father, Jimmy, in the lead up to the Stadium Cars Otago Classic Rally.

A former winner in Otago, Jimmy – now 71 – was fresh from a class win and 13th outright in a field of 100 cars in the Carlisle Rally.

Naturally, Jimmy was putting the pressure on Alister to repeat his success with an Otago Classic Rally victory.

Before the event, McRae stated that he wished he wasn’t driving his own car, due to the fact that a one-pass reconnaissance doesn’t give a driver much chance to get to know the course.

It proved costly too, as an incorrect pacenote on Sunday morning’s second stage saw him fly off the road, puncturing a tyre and hitting a post. It took McRae and co-driver Bill Hayes seven minutes to get going again after the jack broke.

“The speed was fine – it was the corner that was wrong,” Alister joked later.

“I had it noted as flat left over crest. It wasn’t!” he added.

Despite this, McRae was a real crowd favourite, with a smile on his face wherever he went, and added some real class to the event.

Australians John Spencer and Alan Stean had a disappointing event in their ex-works, ex-Kiwi Nissan 240RS.

They broke a windscreen on the shakedown stage when the bonnet flew up, and then had to retire early on day one when an oil fitting saw the oil pressure drop in the engine. 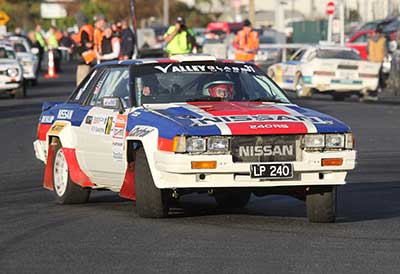 They fixed the car and contested the Super Stage around the streets of Dunedin, but differential problems spelt the end of their rally, and they were unable to start day two.

However, after just 8.5 kilometres of the first stage on Saturday morning his engine let go, and Ayson and co-driver Lisa Hudson were forced to sit on the sidelines and watch the rest of the rally pass them by.

“The car was going awesome until then,” Ayson said.

KELSEY MC2 – WHAT A WEAPON

Hundreds of the Otago Rally spectators were eagerly awaiting their first view of the home-built Kelsey Mad Creation 2 (MC2) in action, but for many, the wait was longer than expected.

Alex Kelsey’s pride and joy expired just 9.1km into the very first stage when it lost a wheel, much to the disappointment of many of the spectators.

The car restarted on day two, but more problems with a starter motor and an off-road excursion 4.1km into the first stage on Sunday added to the team’s woes.

Not to be deterred, Kelsey rejoined the rally on stage 12, setting the second fastest NZRC time on the Waipori Gorge test.

My first glimpse of the car in anger was at the end of the long 41km Berwick stage, and I wasn’t disappointed. The sound of the car blew me away (almost literally!), and my ear drums are still recovering.

I saw it again on SS14, Table Hill, and as the video below shows, the engine and gearbox on the MC2 are music to any motorsport lover’s ears.

While the car is still experiencing teething problems, let’s hope that Alex gets on top of the issues and that the car is around for many years to come. 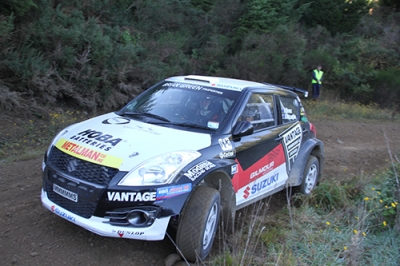 New Zealand’s Maxi Cars didn’t have the greatest event, with both Emma Gilmour and Andrew Hawkeswood having rallies they’d rather forget.

Gilmour’s pace was impressive on SS1, but after passing Graham Featherstone’s Lancer, her Suzuki Swift Maxi slid off the road on pine needles and hit a tree.

The damage wasn’t that great, but it put her out for the day. Damage to the gearbox oil cooler caused more problems, and when the team couldn’t source the required parts from Auckland in time to fix the car, she and co-driver Anthony McLaughlin were forced to sit out Sunday as well.

Hawkeswood had engine problems throughout the event and his Mazda2 never reached the heights that it had in 2014, when it finished fourth outright in the Otago Rally.

DYLAN TURNING IT ON

Auckland’s Dylan Turner finished the NZRC component of the event in third place in his Lancer Evo 9, but perhaps an even more impressive performance came after the rally.

Turner was the MC at the post-event presentations on Sunday night, and entertained the crowd with his humour, particularly when interviewing drivers.

He had a list of questions for Ken Block, Hayden Paddon and Alister McRae, and all three got into the spirit of the night with their openness in their responses.

Dylan mentioned several times that he was keen to build on his 70 Twitter followers, so jump over to @dylanmotorsport and give him a follow. His “selfie” with Alister McRae is definitely worth a look. 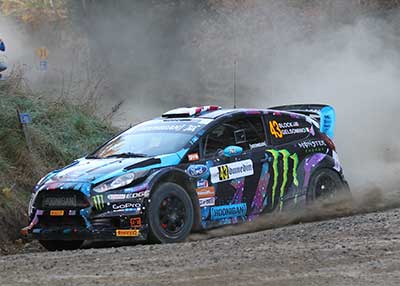 American superstar Ken Block is the ultimate showman – not only behind the wheel, but in front of his fans as well.

Block and his Hoonigan Racing Team attracted thousands of spectators to the pre-event rally show in Dunedin’s Octagon, and also out on to the stages to see the Gymkhana star in action.

It’s interesting listening to the number of people who criticise Block, claiming that he can’t drive, lacks talent and other comments that belittle the Californian. I’ve watched a lot of rallying over the years, and I can confidently say that Block is an immensely talented driver.

People forget (or don’t bother finding out) that he didn’t start rallying until he was 36, and in the 11 years since, he has won American championships, finished in the top 10 in WRC rounds, has won a round of the New Zealand Championship, and set the internet alight with his gymkhana videos.

Yes, he may have had the money to buy the best machinery, but if you don’t have the talent, you won’t achieve the results. Block has done that.

His appearance at the Otago Rally and the Rally of Whangarei was tremendous for NZ rallying, and I’m sure the sport will benefit from his participation. 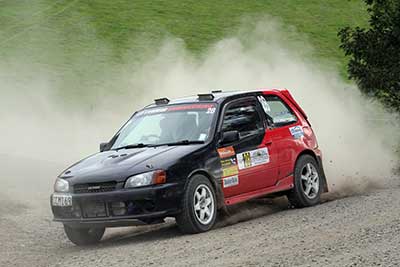 New Zealanders are renowned for their ingenuity when building rally cars, and Phil Terry’s Toyota Starlet GT-Four is a case in point.

The Invercargill driver has shoe-horned a Celica GT-Four engine and running gear into the humble Starlet, and what a weapon it is!

Because of the Starlet’s size and short wheelbase, the car looks like it’s waiting to swap ends at every bend, but boy, does it have some grunt out of the corner.

While it may not be the most competitive car in the field and would struggle to keep up with the hordes of Evos and WRXs, it’s great to see something different out on the stages.

THE STATE OF NZ RALLYING

Hayden Paddon’s incredible victory in the Otago Rally, beating all the New Zealand Rally Championship cars, was a win for the ages and one that will go down in New Zealand rallying folklore.

A Ford Escort hadn’t won a round of the NZRC since before 28-year old Paddon was born.

So does his win say more about the state of NZ rallying, or about the talent of Paddon – a driver many are touting as a future World Champion? 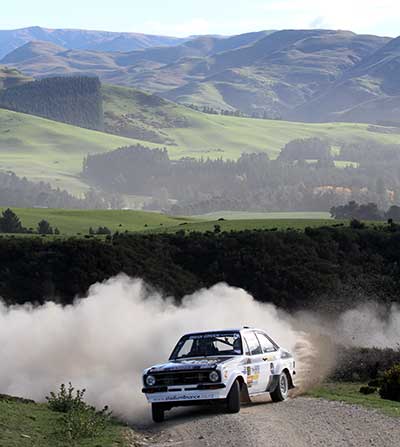 To be fair, Paddon was generally the third fastest driver in the event. Ken Block’s Ford Fiesta and Ben Hunt’s Impreza WRX were generally quicker, but both suffered issues throughout the rally that cost them any chance of victory.

Nevertheless, watching Paddon’s commitment to the stages and his jaw-dropping in-car footage from the weekend proves that he was a worthy winner. As a professional driver, you could tell that he was on his game right from the first stage, despite being in a car he hadn’t driven for 12 months.

Even the brilliant Alister McRae, while being fast and exciting, looked in a different class to the flying Paddon. It was a joy to witness first hand.

Paddon obliterated stage records in the Otago Classic Rally. As a case in point, on the second last stage of the rally – the 17km Taieri Beach stage – he beat the stage record by one minute and 19 seconds! Most of the records will possibly never be beaten …. unless he comes back to defend his title next year.

The NZRC component is without Richard Mason this year, a multiple champion who has pulled out of the championship after his major sponsor of many years withdrew their funding. Yet there is still talent on show, and while the Maxi Car category hasn’t been widely accepted as being successful, it does create some interest in the field.

Emma Gilmour’s Suzuki Swift and Andrew Hawkeswood’s Mazda2 are examples of this, while Kiwi veteran, Dave Strong, has this year fitted a normally aspirated V6 Honda engine to his ex-Ford Australia Fiesta S2000. It sounds great and the spectators love it.

But while they may be fast and fun to drive, if nothing else, the Otago Rally proved that 4WD Subarus and Mitsubishis aren’t that exciting to watch. Spectators were more interested in the Kelsey MC2, the Paddon BDA and the van Klink Mazda RX7. Those making the rules and running the championships may not be thrilled with the news, but that’s what the people want to see.

The in-car footage of Hayden Paddon on Facebook is proof of that. As I write this, it’s been watched nearly 120,000 times, and has been shared over 1700 times. Need I say more?