The 2015 Otago Rally gets underway tonight in the centre of Dunedin, after two days of perfect weather for competitors as they completed their pre-event reconnaissance.

With fine weather also predicted for the weekend, those expecting a wet and cold Otago Rally may be disappointed.

A full field of New Zealand Rally Championship and Classic Rally competitors are ready to tackle the event’s famous stages, which this year are dry, hard and fast after the recent dry spell. 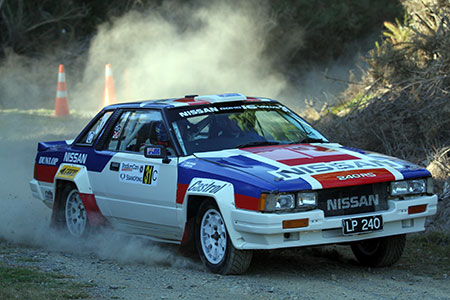 Australian John Spencer at Thursday’s pre-event shakedown.After the publicity start on Friday night, the event heads north to Palmerston on Saturday morning for eight forest and shire roads stages, including the sensational Shag Valley stage – one of the best rally roads you could wish for.

After eight tough stages, competitors head back to Dunedin for the Super Stage around the streets of Dunedin, where a huge crowd of spectators are expected to watch the stars of New Zealand rallying, and event draw cards Ken Block, Alister McRae and Hayden Paddon.

Sunday sees the rally head south to the Waihola region, for tricky stages through the Berwick forest, and some of the event’s most popular stages, including Waipori Gorge, Whare Flat and Kuri Bush.

At the pre-event dinner on Thursday night, Scotsman Alister McRae joined a long list of international drivers to liken Kuri Bush to stages in Rally Finland, while his arch rival, Hayden Paddon, was confident of being able to reduce the Kuri Bush stage record by as much as 20 seconds on Sunday afternoon.

Photos from the event will be available HERE during the weekend.

Videos can be found on our Videos Page throughout the rally.