A host of top level Australian rally drivers will head across the Tasman next April to contest the Dunlop International Classic Rally of Otago when Dunedin once again hosts the southern hemisphere’s premier classic rally.

Brad Goldsbrough, Jeff David and Ross Dunkerton finished second, third and fourth in the 2009 event, and all are expected to return to try to take home the winner’s prize.

Goldsbrough, a former Australian Rally Championship privateers’
champion, will return with the Datsun 1600 that took him to the
runners-up position this year. He will enter the Otago Rally, before
tackling the longer, seven-day, Silver Fern Rally next November.

“We are running the Datto with some changes, now we know what the terrain
is like,” Goldsbrough said.

“The engine power will be much the same, though the gearing will be
different to enable us to better make use of the car’s horsepower.”

Fellow New South Wales driver, Jeff David, who was third this year,
will also likely to contest both the Otago Rally and the Silver Fern
Rally in 2010.

David was deceptively fast this year in his Porsche 911, and is
determined to push further up the leaderboard on his second visit to
the event. 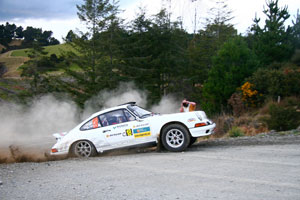 Jeff David and his Porsche finished 3rd in 2009 Otago Rally.“We are in the middle of building a new car and our options will be to
bring it over and run it (and then take it home), or bring over our
current car and leave it in NZ for some other rallies, including the
Silver Fern,” David said.

A former Otago Rally competitor, and crowd favourite, John Spencer, looks set to make his first attempt on the event since 2005.

The spectacular Queenslander will once again drive a Datsun 1600, but
the car will be fitted with a powerful 2.4 litre engine that should
give Spencer a real shot at a top five finish.

Several other Australians are expected to make the trip to New Zealand
for the rally, while organisers are currently working hard on securing
a big name European driver to contest the classic rally.

Next year’s Otago Rally will begin with the popular Rally Show on
Friday, April 9, with the 14 competitive special stages of the rally
being run over Saturday and Sunday, April 10 and 11.

“Planning for the 2010 event is already well under way with some new
stages likely to be included in the route,” Clerk of Course, Norman
Oakley said.

“We will continue to include the rally’s famous stages, such as Kuri
Bush, Waipori Gorge and Whare Flat, however the addition of new roads
will keep the event fresh for competitors and spectators alike.”