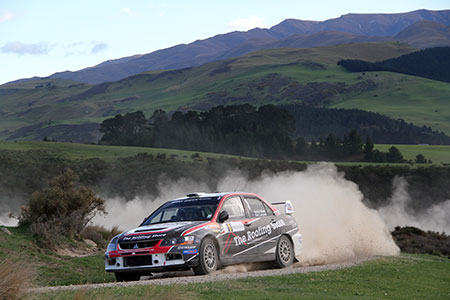 The attrition started in the opening stage when the expected challenge from Alex Kelsey’s MC2 was halted when the wheel fell off, while local driver Emma Gilmour lightly brushed a tree and the resulting damage to the oil cooler saw her retire after stage two.

The initial pace was set by Ben Hunt with Ken Block close in tow, until stage four when Hunt lost five minutes with a puncture and Block retired with electrical problems, phenomenally that left the Historic category Escort of Paddon with a 19 second lead over Campbell and Williams, who was battling an overheating engine.

Across the afternoon, Campbell and Paddon battled hard with just three tenths of a second separating the pair heading into the super special stage, but a spin from Paddon saw Campbell take the overnight advantage. Behind third place Williams, Dylan Turner battled no third gear in his Mitsubishi to come home fourth and Hunt recovered back to fifth. 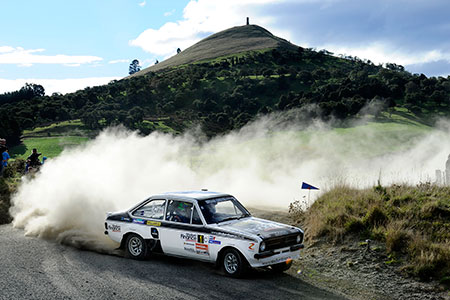 Paddon dominated the Historic category, while former national champion Brian Stokes in a similar Escort held down second and a top five overall result for the majority of the day until a heavy roll-over on stage six, which left the Mazda RX-7 of Marcus van Klink/Dave Neill in second despite battling brake problems and the Mazda RX-3 of Andy Martin/Matt Hayward survived a smashed windscreen to come home third, while the Mk1 Escort of Tony Gosling/Blair Read was forced to retire with electrical issues.

Category five  saw defending champion Darren Galbraith retire after the opening stage with driveline failure, only to return later in the day and set several top three stage times. Dan Walker was left to set the early pace in the class, until engine failure ended his run on stage four, leaving Richard Bateman’s Mitsubishi to take the class win ahead of Hugh Spence’s Subaru, while third place sees Jono Shapley move into the Category championship lead.

The action continues tomorrow with a further seven special stages before the finish in Dunedin at 3.10pm.