The 2016 Otago Rally will see the debut of a brand new Subaru WRX STi NR4 in the hands of the new New Zealand Rally Champion, Ben Hunt.

Following his first national title win this year, Hunt has been offered the ultimate reward by Subaru of New Zealand – the use of a brand new car. 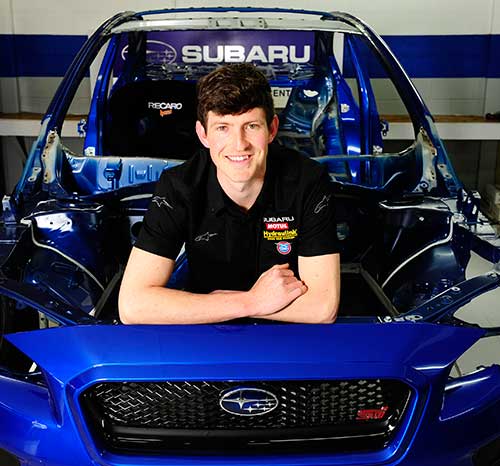 Ben Hunt will debut his new Subaru at the 2016 Otago Rally.Hunt will also become a Brand Ambassador for Subaru of New Zealand and says he and his whole team are “super excited” about the opportunity to drive and run the Subaru WRX STi NR4.

“Working with Subaru of New Zealand is such a fantastic step forward for my rally career. We are really motivated about what next year brings, with the new car, and also around aligning ourselves with the new companies who have pledged support for our 2016 campaign,” Hunt said.

“My 2015 championship-winning co-driver and great mate, Tony Rawstorn, will be back in the car with me next season and, as always, I am lucky to have someone of his talent calling my pacenotes.”

Hunt (27) has grown up around Subaru cars with his family owning various different models throughout his childhood.

“There’s only been one brand for us and that’s Subaru. So along with watching Colin McRae, Possum Bourne and Richard Burns driving Subaru Impreza and WRC cars, it is incredible to think that I am now going to be rallying the newest model Subaru. It really is a dream come true,” he says.

Hunt will receive the all new 2015 Subaru WRX STi race prepped, with a roll cage fitted, and from there he will have it prepared to his own specifications. Dressed up smart in its eye-catching livery, this Subaru rally car means business. Produced by STi Motorsport, it has the homologation specifications accepted by the World Rally Championship.

His Ben Hunt Motorsport team will need to fund the six-round 2016 championship and he is incredibly grateful to new backers Hydraulink, Motul oil, Gull fuel and Neil Allport Motorsport for helping to get this Subaru WRX STi NR4 to the first stage of completion.

The car’s NZRC debut will be in April’s Otago Rally, the 40th anniversary of the rally, which will again be based out of Dunedin in the country’s south.

To be held on April 9 and 10, the all-daylight Otago Rally will be the first round of the New Zealand Rally Championship, while the event will also see the 20th running of the International Otago Classic Rally.

The special stages will offer competitors a wide range of mostly fast, public roads, with less than 20 per cent of the rally to be held in forests.