The opening round of the 2011 Brian Green Property Group New Zealand Rally Championship has seen top rally driver Hayden Paddon secure a comprehensive win at the DriveSouth Rally of Otago.

Coming out 1 minute 36.9 seconds ahead after 15 special stages, Paddon
took an early lead in the dark of Friday evening to eventually cross the
finish ramp first at Dunedin’s railway station on the Sunday afternoon.

Second, defending title champion Dean Sumner from Rotorua put in a
strong performance on the final 47 kilometre special stage to slightly
narrow Paddon’s advantage.  Sumner, in a Mitsubishi, was in an earlier
battle for position with Dunedin local and Subaru driver Emma Gilmour,
before an off-road excursion dropped her down the order mid-morning.
Finishing third, former champion Chris 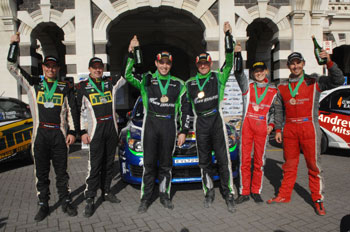 2011 Rally of Otago podium placegetters.West from Timaru grew his performance over the course of the weekend,
edging out another former champion, Richard Mason from finishing on the
podium.

Taking the advantage in to the final stage, Mason punctured near the end
to lose only enough time for the dais position.  The Subaru STI husband
and wife team had to settle for fourth after the 270 kilometre
competition across the lower Otago region.

While Paddon relinquished some of his overnight Saturday lead, his pace
kept him at the head of the day’s standings to collect a maximum haul of
128 points, to Sumner’s 108 and West’s 89.

“It’s a great result for the team – definitely,” said Paddon; having won
on debut with the Robbie Leicester owned Subaru STI.  “There were a lot
of unknown’s coming to an event we know well but with a car we’d never
used here.  So it’s been a bit of a rush and we haven’t quite got it
doing what we want right yet, but already we’ve got good speed.  We’ve
just got to work on the areas we know need improving, do some testing
and get it better for the next one.”

Drilled on when that might be, Paddon said they were working hard at
securing a deal to see them contest the championship second round: Rally
New Zealand in early May.

Seventh overall, Feilding’s Geof Argyle was frustrated by his lack of
pace in the Hunting and Fishing Mitsubishi Lancer, despite taking an
early lead in the open-class four-wheel-drive category that he has won
twice previously.  Suffering from an intermittent electrical fault that
kept cutting the cars computer, Argyle said he’d lost a lot of nerve
when the car would cut-out for a fraction of a second right when he
needed it most.  Second, championship debutant Neil Marshall from New
Plymouth brought his Mitsubishi Lancer home unscathed while third placed
Dylan Turner had some explaining as to the condition of his
Mitsubishi.  Leaving the road in Friday night’s opening stage, Turner
further tested his luck in the #13 LJ Hooker Lancer, rolling the car mid
Sunday morning.

Turner and navigator Malcolm Read had a breezy finish to the day after
the service crew removed the car’s badly damaged windscreen so they
could continue.

An event often known for its level of attrition, Sunday’s six stages
held south of Dunedin claimed many who’d previously been campaigning
well.  Only two of the two-wheel-drive championship cars made it to the
podium, with Nelson’s Ben Hunt Ford Fiesta ST finishing on the top-step,
finishing 16th overall.  Second in the small-car category,
Christchurch’s Josh Marston completed a successful return to
championship rallying to finish 18th of 52 cars.

“We were persuaded to come down here and do the Otago rally,” said Wylie
still reeling at his achievement with new co-driver Stuart Jenkinson in
the Nissan 240RS.  “I was intending to do the four North Island events
after having had a year off.  Then because of the points structure a few
guys got together and talked me round.  So we came down here and
against all expectations really we’ve done well.  It was remarkable the
carnage in the first stage this morning, it was just dramatic.” 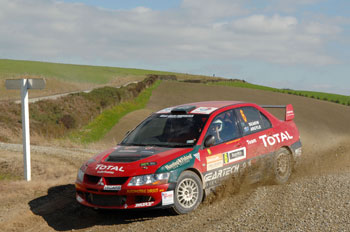 Geof Argyle in action in the Rally of Otago.In the battle for brand supremacy, Paddon’s win puts Subaru ahead in the
manufacturer standings, while Whangarei’s Ben Jagger leads the junior
rankings and Neil Marshall etches his intention in the rookie category.

“It’s been an exciting start to the season and we’re pleased to see such
a strong level of competition and professionalism in what the teams’
are doing.  Otago really turned on a magnificent weekend, both with the
event and the weather,” said Peter (‘PJ’) Johnston, chairman of Rally
New Zealand.

“Having the likes of Ari Vatanen here gave our historic class teams
something to aim for, just as Hayden Paddon became the benchmark for our
premier category teams.  We really look forward to the momentum
carrying forward to the next event at Rally New Zealand in early May.”

The series now continues with the second of five rounds being Rally New
Zealand based at Hampton Downs on 7 and 8 May.  It then moves to Rally
Wairarapa on 28 to 29 May, the International Rally of Whangarei from 15
to 17 July and Rally Hawke’s Bay from 20 to 21 August.

A new-look NZRC website is now live – www.nzrallychampionship.co.nz –
and fans can also find out more information about any of the events on
the New Zealand Rally Championship Facebook page.