New stages, some rally favourites and an all-daylight competitive distance of 280 kilometres are features of the 2015 Otago Rally, to be held in and around Dunedin on May 9 and 10.

As the second round of the New Zealand Rally Championship, and including the popular Drivesouth Rallyfest and the Stadium Cars/Ssangyong International Classic Otago Rally, the event is again expected to attract a high quality field of cars and drivers.

After a Friday night publicity start in Dunedin’s Octagon, the rally gets underway on the Saturday, May 9 with nine stages to the north of the South Island city.

Some of the stages will be familiar to previous Otago Rally competitors, with tests such as Nenthorn, Silverpeaks and Shag Valley being included on the event itinerary. 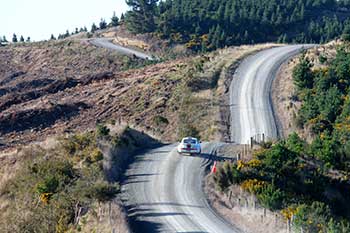 There will also be a new 23 kilometre forestry stage never before used in the Otago Rally, although it has been used in a previous Silver Fern Rally.

The opening day will, as always, finish with the tarmac Super Stage through central Dunedin – a stage that has been run every year since 1996.

On Sunday, the event heads south for traditional Otago Rally stages such as Kuri Bush, Whare Flat and Waipori Gorge.

Of the seven Sunday stages, a brand new public road stage will be included, which promises to be a fast drive on roads never before rallied on.

“Competitors can expect the usual fast and smooth Otago roads, with plenty of crests,” Clerk of Course, Norman Oakley, said.

“While some stages will be familiar to regular competitors, there will be several stages that will be new to everyone.

“And as usual, there will be a mix of public road and forestry stages,” Oakley added.

In all, the event will offer crews 16 stages over the two days.

Oakley and his team are currently in negotiations with a number of international drivers, with another world-class driver expected to be among the starters when the event gets underway in May.