The Otago Sports Car Club will celebrate the 40th anniversary of the Otago Rally in 2016, with many of the event’s former winners and organisers to be acknowledged over the weekend of April 8 to 10.

Over the past 15 years, the Dunedin-based Otago Rally has established itself as one of the Southern Hemisphere’s most popular events, incorporating a round of the New Zealand Rally Championship and the International Otago Classic Rally. 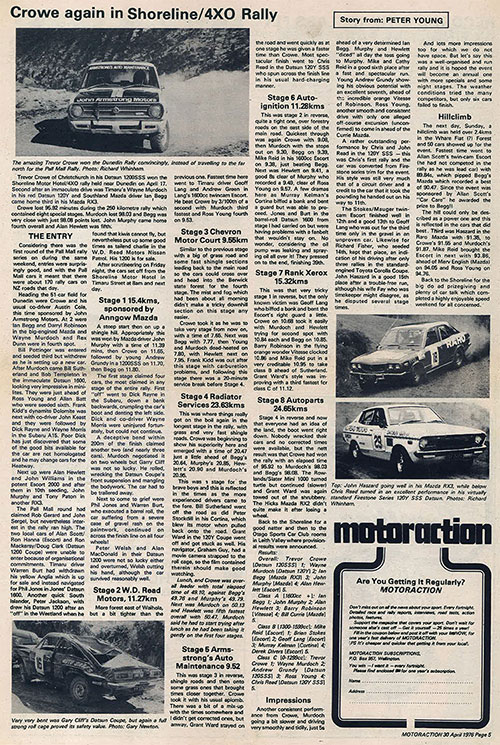 The inaugural Otago Rally – called the Shoreline Motor Hotel/4XO Rally – was conducted on April 17, 1976, and was won by Christchurch’s Trevor Crowe in a Datsun 1200 SSS.

Forty years on, the Datsun 1200 SSS may not be an outright contender, but the spirit in which the 1976 rally was conducted lives on to this day.

The Otago Sports Car Club are keen to involve as many of the event’s patrons from the past 40 years as possible in next year’s anniversary celebrations, with a series of special events already being planned.

A focal point will be the pre-event dinner, held on the Thursday night before the rally gets underway, and which in recent years has been an overwhelming success.

Rally spokesman, Roger Oakley, said it was impressive just how many people involved in that rally 40 years ago were still active in the sport.

“The front runners then, such as Trevor Crowe, Ian Begg and Garry Cliff, are still just as enthusiastic now as they were then.

“In the organising team, there are still some people helping out 40 years later!  It just shows that rallying is a sport that involves you for life.

“The reason, of course, is the great people and their friendships, and we hope that our 40th anniversary is a time when we can get together and remember all the good times.”

Past competitors and organisers of the Otago Rally who would like to be involved in the 40th anniversary celebrations should contact Roger Oakley at: roger.oakley@mwhglobal.com

The original report in the Motoraction newspaper is available to read on the rally website under the ‘History’ tab.  In the period up to the rally, more reports and results on those early events will be added.  Anyone who has early photos or stories to share is welcome to email these Roger.

The 2016 Otago Rally is supported by Dunedin City Council, Stadium Cars and Drivesouth.