Geraldine’s Hayden Paddon has a commanding lead after nine stages of the 2011 DriveSouth Rally of Otago, the Subaru STI driver finishing 1 minute 33.4 seconds ahead of the Mitsubishi of Rotorua’s Dean Sumner.

With the majority of the 29 championship teams recording a clean run
over the first 151 kilometres of mainly county road set south and west
of the city, Friday night’s opening three special stages were a new
contrast to the series.  Completing a further five stages today in
superb autumnal weather, the day ended with a 2.15 kilometre blast
through part of Dunedin’s industrial area. 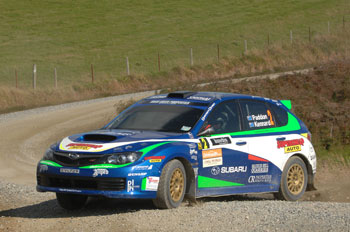 Hayden Paddon slides to victory on Day 1 of the Otago Rally.“It’s a great start for us,” said Paddon, fresh from winning his opening
round of the 2011 Production World Rally Championship season in
Portugal.  Having never driven the Supercheap Autos Subaru STI on New
Zealand roads before, the 23-year-old was taking a measured approach to
an event he last contested in 2009. “We built a buffer on Friday night
and just cruised today.  Today’s stages were quite open and didn’t quite
suit the Subaru but tomorrow’s stages are a bit more technical and it
should suit us a bit better.”

Behind Paddon, Sumner, Gilmour, Christchurch’s Chris West and Masterton’s Richard Mason are all within 46 seconds of each other.

Eighth overall, behind the premier Group N and leading cars, open
four-wheel drive class driver and two-time defending champion Geof
Argyle made the best possible start, despite not having his first choice
of tyres.   Feilding’s Argyle headed off the challenge from series
rookie Neil Marshall (New Plymouth), while the third open-class entry of
Dylan Turner (Auckland) had the dubious honour of the first retirement
of the championship, crashing on the opening stage of the rally. Despite
his early lead, Argyle was far from impressed with his performance.

“Our good tyres haven’t yet arrived yet in to the country and we didn’t
do a great job on the notes to be honest,” said a downcast Argyle.

The hotly contested two-wheel drive class saw Nelson’s Ben Hunt take an
early in his Ford Fiesta ST150, having overturned the earlier time
deficit to Christchurch’s Josh Marston.  Rangiora’s Matt Summerfield
held an early advantage after the night stages in the bio-Diesel powered
Skoda Fabia, however a sensor problem meant he arrived at the first
stage late and incurred time penalties to relinquish his position.

“The stages in the morning were fantastic compared to driving with the
lights on last night. It was awesome to get back into the groove and a
good way to start the season,” said Hunt, positioned 22nd overall at the
half-way mark.

In the historic class, a battle royale between the Ford Escort RS1800’s
of Paraparaumu’s Shane Murland and Christchurch’s Jeff Judd ended
early.  On Friday night’s third stage, Murland rolled out of the lead
and the rally.  Judd, who struggled with incorrectly set-up lights on
his Escort, was on the pace in the light of day, taking four stage
wins.  Second at the over-night halt, Marcus Van Klink in the Mazda RX7
claimed the other two stages, with Ron Davey currently third.

Although he holds a lead of 1 minute 9.5 seconds, all is not well with
Judd’s Escort, the BDA engine using plenty of oil and smoking all around
Dunedin’s Anzac Avenue super special stage.

“It was an awesome day, great roads but I made a bad tyre call in the
long stage earlier, it was a lot drier than I thought,” said Judd.

“We are happy to have taken day one, but it is burning a lot of oil so
we will probably start tomorrow and see how we go, but the big stage at
the end will be a worry.”

In 15th position overall, just behind the Super2000 Ford Fiesta category
car of Auckland’s Dave Strong is 1981 World Rally Champion Ari
Vatanen.  The original ‘Flying Finn’ held second in the two-wheel drive
classic ‘rally-within-a-rally’ for the majority of the opening day, but
when Australian Stewart Reid struck trouble, Vatanen capitalised and now
holds a lead of just over one and a half minutes.  Judd currently sits
third in that event.

Sunday’s conclusion to the event see’s the teams cover a further 119.55
kilometres of six special stages centred around the Lake Waihola service
park.  The event then returns to Dunedin for the ceremonial finish,
being held at Dunedin’s railway station from 3:55pm.

A new-look NZRC website is now live – www.nzrallychampionship.co.nz –
and fans can also find out more information about any of the events on
the New Zealand Rally Championship Facebook page.