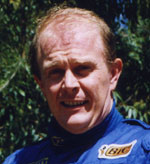 The Dunlop International Classic Rally of Otago has been boosted with the announcement that former Subaru, Hyundai and SEAT World Rally Championship driver, Piero Liatti, will contest the 2010 event, to be held on April 10 and 11.

The Italian was the 1991 European Rally Champion, but by far his biggest moment in rallying came when he defeated the sport’s best drivers to win the 1997 Monte Carlo Rally in a Subaru Impreza.

For the 2010 Otago Rally, Liatti will be co-driven by fellow Italian
Fabrizia Pons – who also guided him to that famous Monte Carlo Rally
win.

Pons is no stranger to the Otago Rally, having co-driven in past years for Alex Fiori and Michele Mouton.

Liatti’s entry in the Otago Rally continues a tradition that the event
has set for bringing world class European drivers to New Zealand.

Widely regarded as the foremost classic rally in the southern
hemisphere, the Otago Rally has seen many of the sports biggest names
driving down under. Juha Kankkunen, Bjorn Waldegard, Jimmy and Alister
McRae, Michele Mouton, Hannu Mikkola and Pasi Hagstrom have all entered
the event in previous years.

Piero Liatti will contest the 2010 Otago Classic Rally.In 2010 Liatti will drive a Ford Escort RS1800 with the legendary BDA
engine fitted. The car comes from the Rossendale Rally Team stable,
which has a long and successful record at the Otago Rally.

Otago Rally spokesman, Roger Oakley, believes that Liatti will be a popular addition to this year’s event.

“In past years our European drivers have proven extremely popular with
rally spectators, and we see this year as being no different,” Oakley
said.

“Piero has a fantastic record, and while this will be his first time
driving a BDA Escort, we know from previous years that drivers of his
calibre don’t have any trouble adapting to a new car.”

“The Rossendale team prepare fantastic rally cars, and we fully expect
Piero to be right among the leaders throughout the two-day event.”

With many Australians and a horde of New Zealand’s top classic rally
drivers already having signalled their intention to compete in 2010,
the scene has been set for a classic battle across some of the world’s
best rally stages.

Many of the rally’s famous stages have been included on this year’s
itinerary, including Whare Flat, Waipori Gorge and Kuri Bush, and this
has been boosted further by the addition of stages such as the
legendary Dansey’s Pass.

In all, the 2010 rally will offer competitors 16 special stages
covering 265 kilometres of competitive driving, with a total event
distance of 780 kilometres.

The rally proper will get under way with a ceremonial start at the
historic Dunedin Railway Station on the Friday night, before the rally
hits the gravel stages early on Saturday morning.