For rally fans, this weekend’s Stadium Cars Otago International Classic Rally shapes up as the battle of the WRC stars – both new and old.

Both will drive rear-wheel drive Ford Escort RS1800s, cars from the glory days of rallying in the 1970s, and the car that has regularly won the Otago Classic Rally.

Hayden Paddon in action in last year’s Otago Classic Rally.Yet surprisingly, neither driver is yet to take the classic title. Paddon is a multiple winner of the NZRC component of the rally, but on his two previous attempts in the BDA he has fallen short, with a puncture in 2013 and a rollover in 2014 hampering his efforts.

McRae’s father, Jimmy, won the event in 2005, and it’s a rally Alister is keen to add to his CV, after taking the Race to the Sky Hillclimb title recently in the ex-Possum Bourne Subaru Impreza World Rally Car.

“The Otago Rally has some of the best rally roads in the world. The fast flowing nature of the stages make it a pleasure to drive, and hopefully with the Escort we can put on a good show for the spectators,” McRae said.

Paddon heads back down under after his most recent WRC event, the Rally of Argentina. And like McRae, he can’t wait to get the rally started.

“The Otago Rally is one of my favourite events in the world, and to compete in the classic section is a lot of fun in one of the best 2WD rally cars from the 70s,” Paddon said.

“It’s really nice to compete in an environment where there is no pressure and I can just enjoy the pureness of the driving.”

“We’re delighted to be able to welcome both Alister and Hayden back to the Otago Rally, and after the spectacular speed that Alister showed in 2009, and Hayden last year, we know they’ll both be right on the pace.

“They are both world class drivers, and anyone who beats them will have put in the drive of their lives,” Oakley said.

The winner of the past two years, Australian Neal Bates, is a non starter in 2015. The Canberra driver was hoping to take a hat-trick of wins in his Toyota Celica, but a clash of dates with a round of the Australian Rally Championship will see Bates miss the event. 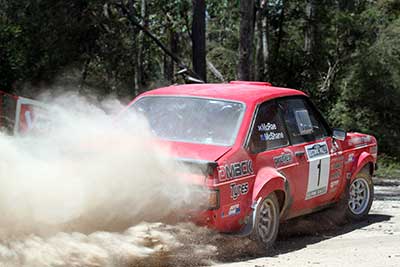 Alister McRae is hoping to repeat his dad Jimmy McRae’s classic win.Three-time Otago Classic Rally winner, Derek Ayson, shapes as the biggest rival to Paddon and McRae. Although he’s Escort mounted as well, the Gore driver has a Nissan engine under the bonnet and will be hoping to repeat his success from 2009 to 2011.

Mazda RX7 driver Marcus van Klink, the Classic Rally winner in 2012, will also be well in the hunt, particularly after his victory in the classic section of the Rally of Whangarei in mid-April. The fire-breathing RX7 is a powerful beast and a real crowd favourite.

The Escorts of Regan Ross (a real surprise packet in last year’s Otago Classic Rally) and former NZ national champion, Brian Stokes, will be ones to watch, while Australians John Spencer and Grant Walker have returned to Dunedin for another shot at the event.

Spencer formerly did the event in a Datsun 1600, but this year is behind the wheel of a beautiful Nissan 240RS and should be on the pace as the event progresses, and Walker is now an Otago Rally regular in an Escort RS1800.

Along with Spencer and Walker, Aussies Ed Mulligan and Catriona Kelly will drive a BMW 325i, and Bernie Keast and Richard Davidson will make their Otago debut in an Isuzu Gemini.

The top seeded Dunedin crew is Allan Dippie and Paul Coghill in their Porsche 911 Carrera RS, two places ahead of the Escort of Brodie Anderson and Rob McConnachie.

Competitors in the Stadium Cars / Ssangyong Otago International Classic Rally will take to the event’s 16 stages after the New Zealand Rally Championship and Allcomers field.

While it appears to be a battle for victory between Paddon and McRae (with the Kiwi the hot favourite), two days of hard, fast rallying will take its toll on the ageing machinery, and getting to the finish unscathed with give any of the front-runners a good chance of taking the win.