One hundred entries have been received for next month’s 40th Anniversary Drivesouth Otago Rally, the first round of the New Zealand Rally Championship and incorporating the Stadium Cars Otago Classic Rally.

The Dunedin-based event, to be held from April 8 to 10, has received more entries than any Otago Rally in the past 30 years.

Event spokesman, Roger Oakley, said the organisers are delighted with the entry.

“Entries are up in every area, rallying really seems to be on the rise.  It’s especially pleasing to see the strength of the national championship field.  New cars are being built, and there is real depth to the field.  Spectators are in for a treat,” Oakley said. 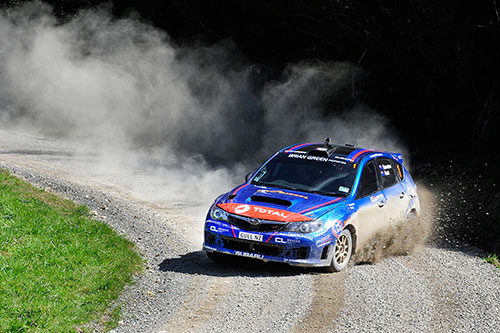 The Aucklander struck problems in last year’s Otago Rally (an event won by  World Rally Championship star Hayden Paddon), and will be hoping for the win in 2016.

However, he won’t have it all his own way, with a full list of New Zealand’s best rally drivers eager to strip him of his title.

Matt Summerfield, Lance Williams and Matt Jansen are also Subaru-mounted, while a host of Mitsubishi Lancer Evos will battle for victory in the hands of Phil Campbell, David Holder and Sloan Cox.

Local favourite, Emma Gilmour, returns in her Suzuki Swift Maxi 1600, and her battle with the new Mazda 2 Maxi of Andrew Hawkeswood will be one to watch.

Glenn Inkster’s brand new Skoda Fabia , built to the new Australasian AP4 4WD rules, will make its NZRC debut, and is expected to be well within reach of a top three finish.

The Estonian is the winner of five WRC rounds, and will drive a Ford Escort RS1800 prepared by the Rossendale Wines Rally Team – one of the Otago Rally’s biggest supporters.

Christchurch’s Marcus van Klink and his Mazda RX7 look to be the best chance of a non-Ford Escort win in the classic section of the event, but Regan Ross, Derek Ayson, Jeff Judd and Brian Stokes will all be pushing hard to keep the Mazda driver at bay.

Ten Australian crews will contest the event this year, headed by the deceptively fast Porsche 911 of Sydney’s Jeff David, while fellow NSW driver, Ben Barker, will make his Otago Rally debut in his BMW 320is.

Ford Escort drivers Stewart Reid and Grant Walker will also make their way across the Tasman to contest the event, having both done the rally on several occasions.

The leading Dunedin competitor in the Otago Classic Rally is Allan Dippie in a Porsche 911.

The Leviathan Hotel Allcomers Rally is led away by the ever impressive Deane Buist in an Escort, and he will be chased hard by the Mitsubishi Evos of David Clearwater and the evergreen Mike Turfus.

The 2016 Drivesouth Rally Fest gets underway with a publicity start in Dunedin’s Octagon on Friday, April 8. The competitive stages take place over the following two days.