The Otago Rally is excited to announce that Estonian, Markko Märtin, will return to contest the 2017 Stadium Cars International Classic Rally in a Ford Escort RS1800.

Märtin, together with Belgian co-driver Stéphane Prévot, won the 2016 event and head back to Dunedin to not only defend their title, but renew acquaintances with friends made last year. 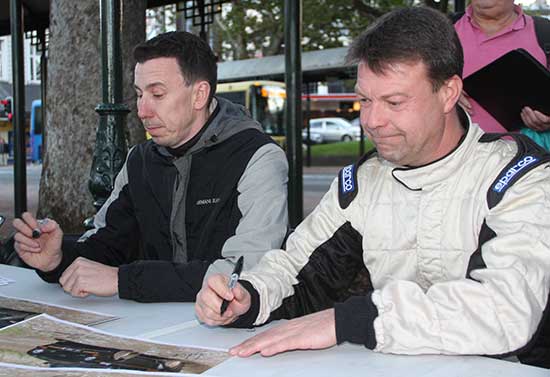 Markko Martin and Stephane Prevot return to the Otago Rally for 2017.Driving the black and gold Rossendale sponsored Escort, Märtin was the star of the 2016 event, eventually taking victory by over two and a half minutes.

The former Ford, Subaru and Peugeot driver in the World Rally Championship is looking forward to returning to an event he contested for the first time last year.

“I thoroughly enjoyed my time in Dunedin last year, and to have the opportunity to return to the rally again is fantastic,” Märtin said.

“I met a lot of great people last year, and having the chance to catch up with them again will be a lot of fun.

“Of course driving the Rossendale Escort again on the wonderful Otago roads will also be something to look forward to,” he said.

Markko won’t have it all his own way this year, with four-time Australian Rally Champion, Simon Evans, also on the Classic Rally entry list.

Others, such as Marcus van Klink, Derek Ayson, Stewart Reid and Jeff David – all Otago Rally regulars – will also be in the hunt for victory.

Event spokesman, Roger Oakley, said that he was delighted that Markko and Stéphane were returning.

“It’s wonderful that Markko has agreed to come back again, as he was so well received last year,” Oakley said.

“Markko’s speed on the stages was something to behold, and both he and Stéphane are wonderful ambassadors of the sport.”

Märtin retired from the World Rally Championship at the end of the 2005 season after 84 events and 101 stage wins.

Current Hyundai factory team co-driver, John Kennard, has been instrumental in getting Markko Märtin back to the event, for which the Otago Rally organisers are extremely grateful.

Together with the partnership with Brent Rawstron and the Rossendale team, Kennard’s assistance has been vital.

The 2017 Otago Rally is also the first round of the New Zealand Rally Championship.
Starting at Dunedin’s Octagon on Friday, April 7, the event features 14 special stages on Saturday and Sunday, with a competitive distance of nearly 285 kilometres.

A field of over 100 cars is expected to start the event, matching the record number received in 2016.