Otago Rally set to be another “classic” 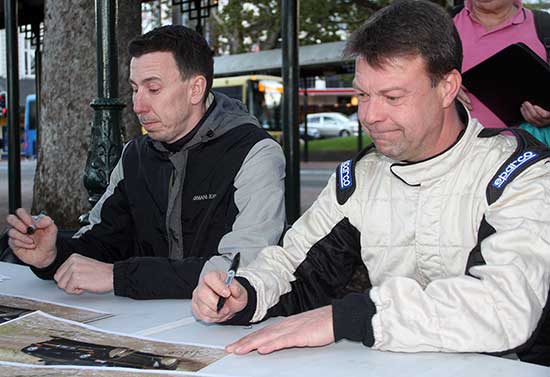 Markko Martin (left) and Stephane Prevot will be back to defend their Otago Classic Rally title.The Estonian is one of nine international entries in the rally, but the former Rally of Finland winner will start as the odds-on favourite to win again this year in his Rossendale Wines Ford Escort RS1800.

Despite 2016 being his first visit to the Dunedin based rally, Martin was clearly the class act last year, and with experience of the rally and the nature of the tricky South Island roads under his belt, he’ll be a hard man to catch.

The Escorts of Regan Ross, Tony Gosling, Jeff Judd, Shane Murland and Australian Stewart Reid will also be well on the leading pace, as will John Silcock’s Mazda RX7 and the Porsche 911 of another Australian, Jeff David.

Throughout the Classic field there’s something for all motorsport fans: from Mark Laughton’s crowd-pleasing V8-powered Hillman Avenger, through to Ed Mulligan’s BMW 325i and Darryn Snooks’ works replica Datsun Violet 160J.

Marcus van Klink will be hoping to upset the Escorts with victory in his Mazda RX7.“Once again the Classic field offers something for everyone, and we’re expecting large spectator numbers to watch the rally this year,” Otago Rally spokesman, Roger Oakley, said.

“We’ve got a nice mix of fast Kiwis going up against international drivers of note, and we expect the rally to go right down to the wire on Sunday afternoon.”

After a promotional start in Dunedin’s Octagon on Friday afternoon, the rally hits the gravel on Saturday with seven stages to the south west of the city. Fans can watch the cars at several spectator locations, before the final stage of the day around the streets of the city.

On Sunday, the action continues with a further seven closed-road tests based around Waihola, the longest being the marathon 47km Shaws Hill stage.

Full spectator information and the event entry list is available from the Otago Rally website at www.otagorally.com