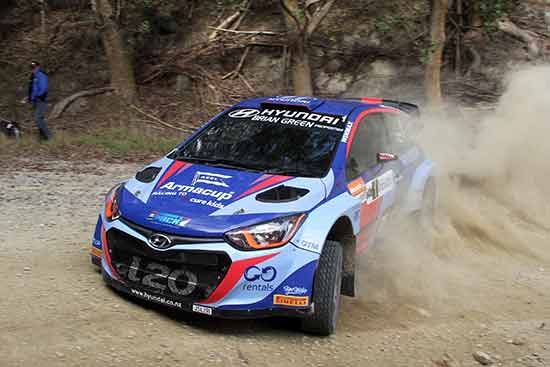 David Holder leads the Otago Rally after Day 1. (Photo: Peter Whitten)Driving his factory-backed Hyundai i20 AP4+, Holder and co-driver Jason Farmer started the day slowly, but finished in front after many of their rivals hit problems over the day’s seven stages.

In his first event in the car – which WRC star Hayden Paddon drove to victory in the Otago Rally last year – Holder quickly came to grips with the four-wheel drive machine.

He leads the Mazda 2 AP4 of Rhys Gardner and Ally MacKay, with the second Force Motorsport Mazda 2 of Andrew Hawkeswood and Jeff Cress a further 19 seconds back in third place.

Hawkeswood had led the event after stage three, but mechanical problems on stage four saw him drop back down the order.

Local favourite, Emma Gilmour, was even more unlucky, retiring her Suzuki Swift after stage four with gearbox problems. She later rejoined the rally ahead of the final stage of the day, around Dunedin’s streets.

Fourth place belongs to the Skoda Fabia AP4 of Glenn Inkster and Spencer Winn, with the top five being rounded out by Graham Featherstone and Dave Devonport in their Mitsubishi Lancer Evo 7. 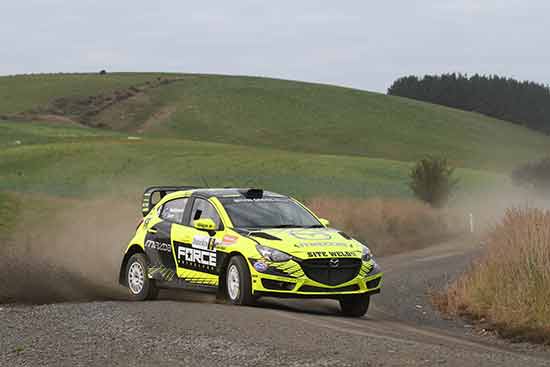 Andrew Hawkeswood set a string of fastest stage times in his Mazda 2. (Photo: Peter Whitten)One of the drives of the day came from Christchurch’s Deane Buist and Karl Celeste, who lie sixth in their Ford Escort Mk2, ahead of many more fancied four-wheel drive cars.

Irish star Frank Kelly was coming to grips with the Otago Rally stages when he left the road on stage four. His Ford Escort wasn’t badly damaged and he rejoined the rally for the day’s final stage.

The Otago Rally continues on Sunday with a further seven gravel stages, before the finish back at the Dunedin Railway Station at 3.00pm