Dominant Paddon streets the field on Day 1 of Otago Rally

Former WRC star Hayden Paddon has opened a lead of 3 minutes 27.4 seconds at the end of the opening day of the Brian Green Property Group New Zealand Rally Championship opener at the Winmax Brakes Otago Rally.

Paddon took opening day honours in the Hyundai NZ i20 AP4 ahead of Dylan Turner in the LJ Hooker Audi and surprise packet Robbie Stokes in the Stokes Motorsport Ford Fiesta AP4.

In his first event in the top class, Stokes showed phenomenal speed and commitment on the lightning-fast Otago roads to claim a memorable third place in a tight battle with reigning national champion Ben Hunt, Turner and Matt Summerfield.

Turner snatched second from Stokes on the short tarmac stage in central Dunedin to edge the youngster by 2.6 seconds. 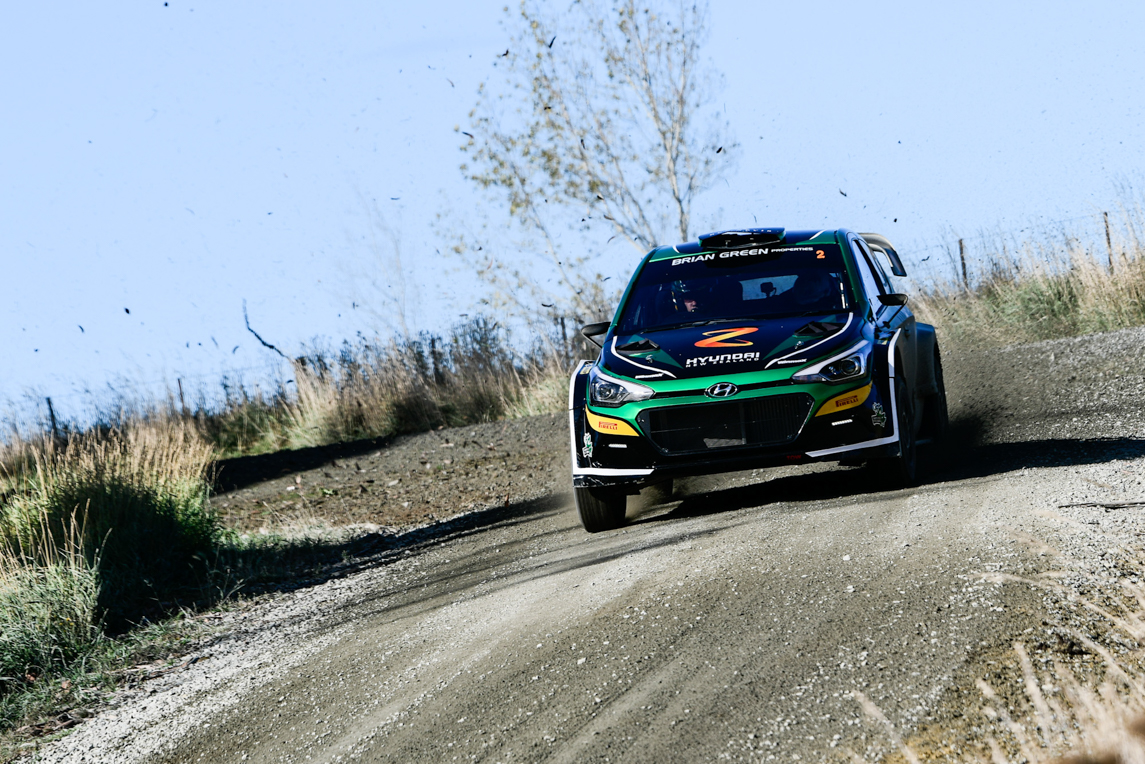 Hayden Paddon has a lead of over 3 minutes after the opening day. Photo: Becky Ladbrook

Hunt was fourth in the Hydraulink Subaru – 2.1 seconds behind Stokes while Summerfield (Andrew Simms Mitsubishi) was fifth; a further 13 seconds adrift.

Earlier local driver Emma Gilmour was the best of the rest behind Paddon on the day’s opening two stages before an electrical drama curtailed her charge in the Vantage Suzuki.

The Otago Classic Rally produced a battle of old, as friendly rivals Gore’s Derek Ayson and Cantabrian Deane Buist jostled for the first day honours over the first seven stages.

Both are past winners of the classic rally and although Ayson was in his rear-wheel-drive Ford Escort Mk 2 and Buist’s VW Gti Golf is front-wheel-drive, they ended up 21.8secs apart following the final tarmac superstage this afternoon.

Ayson was worried his lack of rallying recently – having missed the Otago Rally in 2018 and 2019 and not contesting any events at all for two years would mean he would be rusty for the first four stages. In reality it only took “about four corners” for him and experienced co-driver Rocky Hudson to gel.

There was however, a slightly nerve-wracking start to their new in-car partnership.

“At the first intersection I nearly threw it away. I had written 30 metres in recce and later extended it to 50 metres. I should’ve left it at 30! I think Rocky was thinking ‘what’s going on’?” Ayson said.

He enjoyed the revival of a “good fun, battle of old” with Buist over today’s fast flowing stages to the south of Dunedin but worried that the tables might be turned tomorrow.

“Deane loves the forestry and we go through twice,” he said of the repeated 39km Siberia stage. 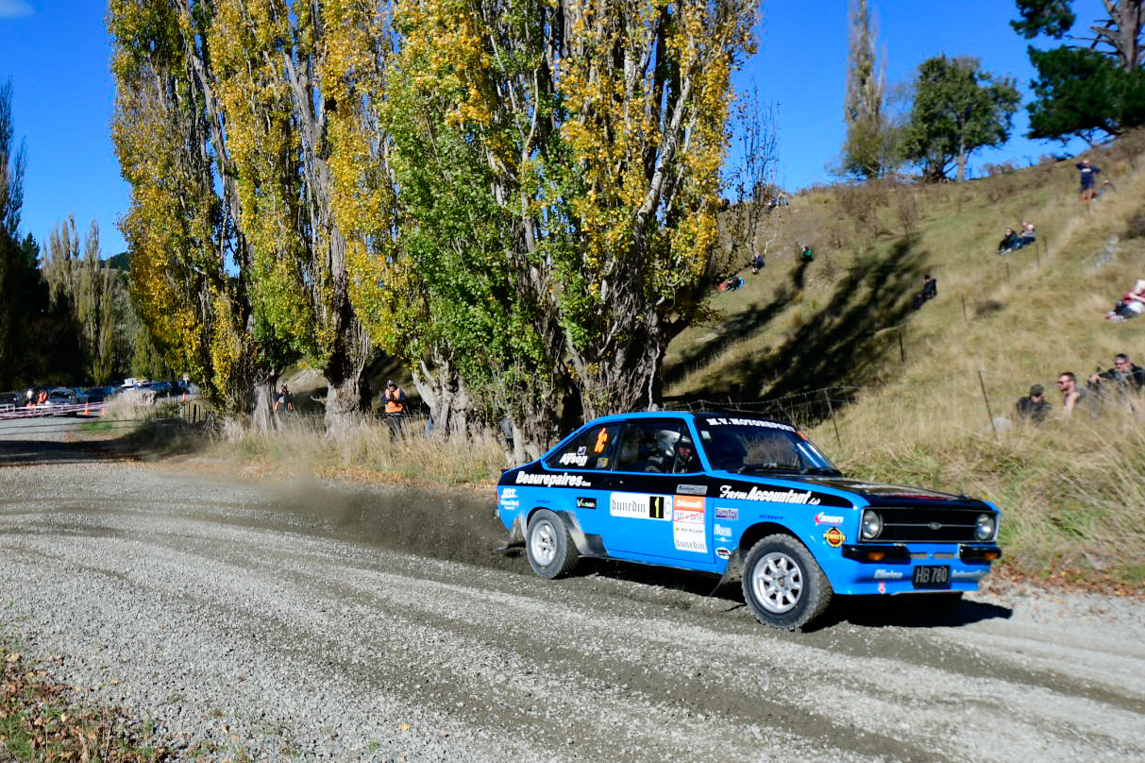 Buist’s 2-litre engine didn’t quite have the horsepower he was after today.

“My car is not super powerful and it struggled up the hills a bit,” he said.

Tomorrow’s tighter, twisty seven stages which include iconic Otago Rally tests Waipori Gorge and Kuri Bush would be more suitable for his VW he believed.

Paraparaumu’s Shane Murland proved that longevity behind the wheel pays off, as he bought his Ford Escort RS 1800 home in third position today.

“I’ve been rallying for a very long time. I’m one of the oldies out there. My first rally was in 1972 and I’m still really enjoying it.”

He described his approach as “steady eddie” and his plan for Sunday was simple.

“Really do the same tomorrow that we’ve done today. Keep the mind focused.”

The two guest drivers, Kiwi motorcycling stars Avalon Biddle and Aaron Slight, who were both making their rallying debuts, steadily improved as they utilised their competitive skills to move slowly and steadily up their respective fields.

“People say bike riders have big gonads – I reckon these rally drivers have. You’ve got two human errors that can go wrong. You usually rely on yourself on tarmac, or on a bike, but with rallying you’ve got two things that can affect your result,” he said of rallying’s driver and co-driver relationship.

Fortunately for him he had veteran navigator Ian McKee on board and although Slight started out cautiously, finishing the first stage in 83rd position, he gradually upped the ante to finish the final gravel stage for the day in 56th. 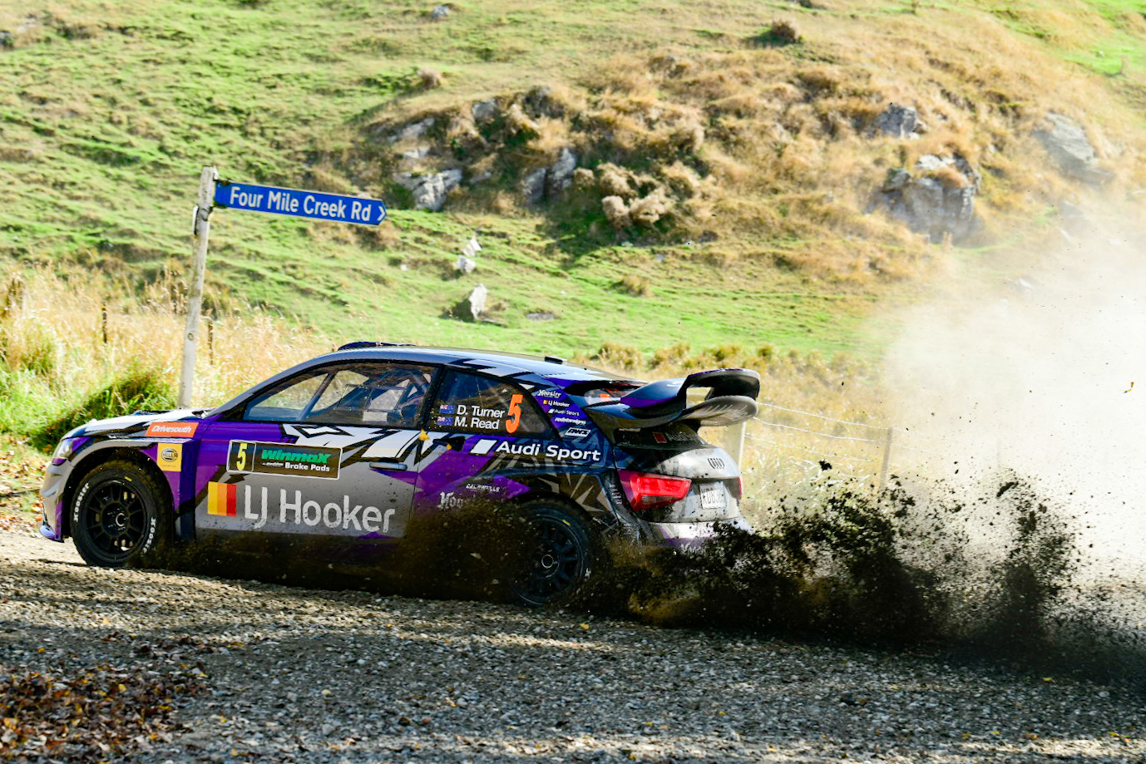 Dylan Turner ended the day second in the NZRC component in his Audi. Photo: Becky Ladbrook

Slight discovered the trick to driving the Escort was: “the harder and more sideways you drive it, the better it is.”

“A couple of corners, I was getting in there too hot and you are sort of going for the brakes but you’ve got to nail it and drive it around the corner,” he said.

The first woman to win New Zealand’s Supersport 600 title and two-times winner of the FIM European Women’s Cup, Biddle was beaming after an “awesome” day all round in her Magnum Motorsport -run Subaru Impreza H6, competing in the Otago Classic 4WD Rally.

“It’s been a huge, huge learning curve. Everything is new to me and I’ve had very little time on four wheels, especially going sideways!”

“From the beginning of the day until now I have improved heaps. I feel a lot more confident in the car and am actually loving the gravel roads. They are so much fun getting sideways into and out of the corners,” Biddle said.

She credited “super calm” co-driver Grant Marra for coaching her through the day. They only had one moment when Biddle thought she was going into a ditch and although her heart rate shot through the roof, Marra “didn’t even flinch.”

Dunedin’s Mayor Aaron Hawkins may have done more than flinch after being strapped into the passenger seat of Paddon’s Hyundai Kona EV rally car for some demonstration laps around Anzac Ave. He emerged from the silent but stunningly-fast EV with a grin on his face, admitting to feeling both terrified and enamoured with the experience, in equal measures.

Tomorrow’s seven stages will take the Otago Rally teams south of Dunedin again before they finish at the new venue of Brighton Domain from 3pm.

Follow all the live results from the Otago Rally at www.chrissport.co.nz